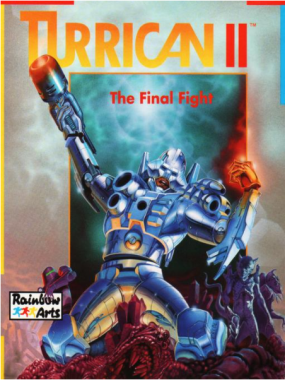 In 1990, German developers Rainbow Arts turned the Amiga gaming world on its head with the release of Turrican, a sprawling run-and-gun shoot-‘em-up which not only pushed the Amiga’s hardware to the limit but proved that beautiful looking games could actually be playable too.
Critics heaped superlatives on Turrican which received numerous honors at various award shows.
The bar had been set pretty high and it would take Rainbow Arts themselves, along with developers Factor 5, to not only match but out-do the original Turrican with its sequel Turrican 2 – The Final Fight, released in 1991.

Overview
Turrican 2’s comic-book opening sequence sets the scene as the Avalon 1 spaceship charts a previously unexplored region of the galaxy. With state-of-the-art defences and weapons systems, the Avalon is considered by its crew to be impervious to any harm. Suddenly, the ship’s defence systems activate and an enormous battlecruiser materializes off the Avalon’s port side.

After a brief exchange of fire the Avalon’s defence systems are rendered inert by the attackers and the ship is boarded by hordes of alien invaders. The human explorers fight bravely but are hopelessly outnumbered; eventually the alien attackers are triumphant. A deathly hush descends on the ship as the aliens’ commander, a sinister overlord known simply as ‘The Machine’, boards the stricken vessel to view the spoils of victory. Satisfied that there are no survivors, The
Machine and his army leave the ravaged

Lone survivor Bren McGuire then
attack emerges from the wreckage to survey the
devastation. Making his way to the
weapons division of the ship, McGuire dons the newest iteration of the Turrican suit, and raising one fist to the sky, vows his revenge on The Machine.

Gameplay
The gameplay of Turrican 2 is very similar to that of its predecessor. The player controls Bren McGuire, running from left to right and traversing the game’s many platforms and ledges while battling a huge assortment of bad guys. The opening level sees the player in the desert on the outskirts of The Machine’s stronghold, armed with only a single shot weapon. As in the original Turrican, weapon upgrades are available throughout each level, sometimes floating around as icons which can be collected on contact, sometimes hidden in invisible power blocks which appear when hit with the player’s fire and which continue to spew out various weapons upgrades and other treasures when shot repeatedly.
The game imposes a time limit on each level but it’s pretty generous, meaning the player is free to explore without constantly watching the clock. And a good thing too because Turrican 2’s levels are HUUUGE. We really mean that. It’s quite easy to get lost in some of the later levels in particular, leading to a frantic search for the exit as the precious seconds tick down.
As in the original game, the levels across Turrican 2 are divided into distinct worlds, each with its own look and music. The level designs are ingenious. Although the game is a traditional multidirectional sideways scroller, you never feel hemmed in. In fact, it’s possible to complete many of the levels without ever even seeing a substantial portion of each level. This makes Turrican 2 a joy to replay, as you explore previously unseen sections of the labyrinthine worlds.
As an added bonus, Turrican takes to the skies for three of the later levels, acquiring a fighter craft from the enemy and turning its weapons against them. Not many other arcade games of the time throw a whole other game style into the mix halfway through proceedings.

Weapons
Various improvements and additions have been made to the Turrican suit since the first game.
Turrican 2 features three main weapons, as opposed to the player’s arsenal of just two in the first game.
The player can still upgrade the original single shot weapon to multiple, a three-way weapon which is indispensable in the game’s many crowded tunnels and dungeons. Lasers also make a return from the first game, but they’ve received a serious overhaul.
Unlike the original’s long slender beam of light, Turrican 2’s full-strength laser weapon is a sight to behold, an enormous wave of fire and plasma slicing through enemies with a glorious whoosh. Multiple is easier for long range combat, not to mention dispatching enemies at a distance from above or below, but lasers are essential when confronting the larger enemies and guardians that populate the world of Turrican 2.
A new addition to Turrican’s weaponry is the bounce projectile, which splits and bounces around the screen, damaging or destroying any enemies it meets. It’s not particularly useful out in the open or against guardians, but proves very effective at clearing out cramped passageways.
Turrican’s lightning bolt weapon makes a welcome return from the first game but the designers have given it a visual tweak. Instead of a straight line which extends from the player’s gun, the bolt now arcs and curves as the player rotates their weapon 360 degrees; it’s a stunning visual effect. As before, the length of the bolt weapon can be extended by collecting power-up icons, making it a truly devastating weapon at long range.
The original game’s power lines feature again – pressing the space bar emits two vertical plasma beams that originate from the player’s position and sweep across the screen, taking out any bad guys in their paths. The player starts out with three of these but more can be collected along the way.
To complete Turrican’s awesome arsenal, the suit features a mega weapon which can be triggered by pressing down on the joystick while holding the fire button and pressing the space bar. It’s a bit fiddly to activate but once unleashed, all hell breaks loose as every weapon available in the game activates in a four-second orgy of sound and fury. Use it wisely though, as you’re only given one per life. The original game’s gyroscope mode is still present, activated by holding down the joystick and pressing the spacebar, though the three-use limit from Turrican has been removed, meaning the player is free to enter gyro mode whenever the going gets tough.

Graphics and audio
What can we possibly say about Turrican 2’s graphics and sound that hasn’t been said before? It is, quite simply, one of the finest looking arcade games to ever grace the Amiga, making full use of the machine’s color palette and powerful graphics chips.
The shading and detail in the landscape, structures and enemy sprites are stunning.

But if it looks good standing still, wait till you see it move. Super smooth parallax scrolling throughout the game makes you feel like you’re playing on an arcade machine, not a home computer. Each sprite is expertly animated and moves with a fluidity and smoothness that really elevates the game above most of its peers.
The animation for the player sprite in particular, is a sight to behold; you’ll even see a shadow fall on the barrel of the player’s gun as Turrican runs across the screen. Countless other visual flourishes abound, including bridges which bend with the player’s weight as you run across them, underground waterfalls, and the aforementioned 360-degree laser weapon.
The audio receives equal care and attention, with the Amiga’s sound chip working overtime to produce the many explosions and weapon sounds. Sampled voices are even included on one of the later levels, as hordes of giant robots stampede down a factory assembly line, urging the player to “make my day”.
The music in Turrican 2 requires a special mention. For my money, it’s the best game soundtrack in the Amiga’s illustrious history, and one of the finest soundtracks in the history of video game music. Composer Chris Huelsbeck, through the use of some ingenious technical trickery, manages to output seven channels of audio instead of the Amiga’s usual four. The result is pure audio heaven. From the 7-minute main theme which plays over the game’s intro, to the final ending sequence, each of the game’s tracks is a stunning, instrument-rich composition, with the in-game music perfectly matched with each game level. These tracks are not just background noise; they’re proper melodic compositions, with glorious chord changes and harmonies. It’s impossible to pick a favorite track, but standouts include The Wall, Concerto for Lasers and Enemies, Desert Rocks and The Hero, the latter which plays over the scoreboard screen. That’s right, Turrican 2’s music for entering your name on the frigging scoreboard is better than many other Amiga titles’ in-game music. Such is the reverence for Turrican 2’s soundtrack that in 2016, 25 years after the game’s release, composer Chris Huelsbeck created a limited Collector’s Edition Box Set, featuring new live orchestra recordings of music from the game.

Conclusion
Rainbow Arts/Factor 5 really outdid themselves with Turrican 2 pulling out all the stops both technically and creatively. While the original Turrican remains a classic, it always felt like something of a dry run for the sequel. Turrican 2 takes everything the original did, and does it better, while adding its own unique style. Furthermore, it proved that the Amiga was more than capable of holding its own in the face of stiff competition from the next generation consoles. After the introduction of the powerful Sega Megadrive and Super Nintendo, many felt that the Amiga’s thunder as a premier games system had been stolen; Turrican 2 put such fears to rest, matching and out-performing most of the console titles of the era.
Marrying technical excellence with artistic prowess on a level rarely seen before or after on the Amiga, the game is a faultless arcade blaster which should take pride of place in any serious Amiga gamer’s collection. Two years later the final game in the trilogy would appear. Could they improve on Turrican 2 or would the series end on a damp note? Find out soon in our review of Turrican 3.