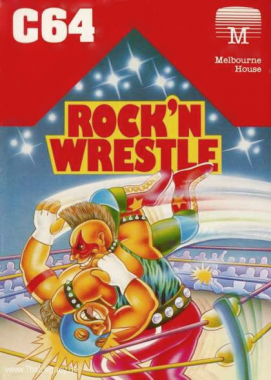 There has never been a shortage of wrestling-themed video games, just look at the number of WWE titles released since the PlayStation 2 era. But a fair few were made for the old 8-bit systems and Rock ‘n Wrestle (known in the U.S. as Bop ‘n Wrestle) is a fairly early example. Popular opinion would suggest that it wasn’t a great game, but it had a sophisticated grapple system, rope physics, digitised sound effects and an impressively varied set of available moves.

It is a one-on-one wrestling game for one or two players. In one player mode, you play as a generic-looking blonde wrestler named Gorgeous Greg (no coincidence that the lead programmer and graphics artist were both called Greg), who must go up against a colourful roster of increasingly tough computer-controlled wrestlers to become the champion. These guys follow all manner of 1980s wrestling stereotypes; we have a hillbilly, a punk, a cowboy, a bald guy with an eye patch, a man in an Arab headdress, an Apache Indian, a Rey Mysterio look-alike in a mask, a moustachioed gentleman wearing a peaked leather cap and a hate-filled aristocrat who wrestles in a bowler hat. In two-player mode, either player can choose to wrestle as any of the aforementioned Village People, although their moves are all identical and only the head sprite and colour attributes distinguish them from one another.

The ring is viewed from the top / side and wrestlers can move up, down, left or right but not diagonally. While standing, you can use forearm, kick or knee attacks to stun your opponent. You can also grapple, climb the turnbuckle or bounce off the ropes. Grapple moves vary depending on the direction your opponent is facing when you grab him. From the front, you can headbutt him, peform a suplex or lift him up to shoulder height, from there you can perform a body slam, airplane spin or pile driver. From behind, you can perform an atomic drop or backwards suplex. From the side, you begin to spin your opponent around and must waggle the joystick to build up speed. Release the fire button to launch them into the ropes, then as they rebound you can perform a clothes line, drop kick or cross-body pin (timing is essential!).

While your opponent is on the mat, you can kick him, perform an elbow drop (complete with theatrical wind-up of the arm) or go for the pin. Finish him off in style by bouncing off the ropes first, or climbing the turnbuckle for a high-flying splash pin. 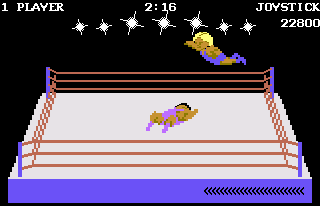 Energy is represented by rows of chevrons along the ring apron. The lower your energy, the more unlikely you will be to break out of a pin. If a wrestler takes too many standing blows or a headbutt, they will spin around the ring in a daze, at which point they can be grabbed again if you’re quick. Wrestling is confined to the ring; you cannot leave or throw your opponent out. The ring is doesn’t scroll and all the action takes place within a single screen. A single SID tune provides the eponymous rock music and although I would call it bluegrass, wouldn’t sound quite as punchy.

As mentioned previously, the game was not particularly well received, scoring just 53% in Zzap! 64. This was not a fair score; it’s possible that the team were not wrestling fans and didn’t appreciate its good points without similar games to compare it to. Although it might not be immediately obvious, the control system is about as solid as it could be with a single fire button.

While the sprites might look a bit rough compared to later C64 games, they are surprisingly well-animated and there are some nice touches such as the way the ropes bounce. The background is quite dull though, I always wondered why they didn’t add some crowd graphics like in the Spectrum version. A hacker friend once told me that the game uses the entire 64 KB of memory; there an occasional flicker in the black areas, so perhaps the game stores some data in the colour RAM. There are some graphical oddities; inadvertently alternate between kick and knee attacks and your wrestler does the Hokey Cokey. Weirder still, when a wrestler lies on the mat at a certain angle it looks like their head has separated from their shoulders!

Not many games had sampled sound effects back then and in Rock ‘n Wrestle these are heard over the top of the music! Yes, they are scratchy as hell and the three count is coughed rather than spoken, but it’s still mightily impressive for its time.

A little more variation in the wrestlers’ attack style and a greater difficulty curve would have made the game even better. Had there been more use of palette swapping, perhaps even a career mode similar to Barry McGuigan’s Boxing, then Rock ‘n Wrestle could have been an all-time classic. The most fun was to be had in two-player mode; I remember playing this with my brother and my more technical gameplay versus his frantic joystick bashing made for some interesting matches.

Despite its flaws, it is difficult to imagine a more complete wrestling game on an 8-bit computer. The controls are responsive, you can beat an opponent without using the same move twice and have the choice to go for a quick pin or try to win in style. These are the marks of a great game; it somehow seems to have more going for it than so many of the later wrestling games. I remember beating it easily as a kid, but playing it again now I struggled to get past the fourth or fifth wrestler. It must be easier with a proper joystick, at least that’s my excuse.