With the video games and pop music of the 80s and 90s woven together in our memories to form a nice warm blanket of nostalgia, let’s dig out this popular Megadrive game based on one of the oddest movies of our time. This game is of real significance to me personally, which I’ll explain later.

Whether you were a fan of Michael Jackson or not, I defy anyone to say they have never bought, danced to or simply enjoyed listening to at least one of his many hits. The Moonwalker movie was part biopic, part fantasy and entirely weird. It was released at the height of Jackson’s popularity and did well at the box office despite some dodgy acting, a lot of filler and its fragile, egocentric plot. It was Sega who picked up the arcade and console game licences, keen to leverage Michael Jackson’s seemingly unwavering popularity. 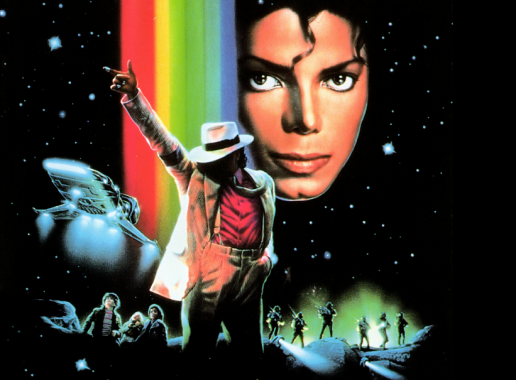 There were of course three different Moonwalker games: the Sega coin-op, the U.S. Gold home computer game and this game for the Megadrive and later the Master System. I won’t go into details about the differences, Daniel Ibbertson of Slope’s Game Room (one of my favourite YouTube channels) already has this firmly nailed down. The arcade game was a beautifully-presented and highly original isometric shoot-’em-up, that I confidently expected to translate well to a 16-bit console. I was a little dismayed to find a preview screenshot in The Complete Guide to Consoles Vol. 2 depicting a very different game.

The Megadrive game was very similar to the original Shinobi. The player must guide Michael around a 2D map to find and release kidnapped children (let’s just not even go there, okay?) and deal with innumerable waves of bad guys along the way. Once all the children on each sub-level (or “act” as the game calls it) are found, Bubbles the chimp appears to point the way to the boss battle. A high quality YM2612 rendition of a popular Michael Jackson plays throughout each level. 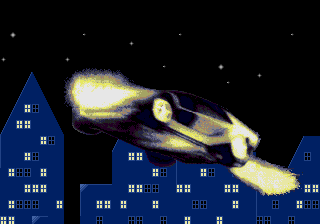 Michael’s basic form of attack is to throw a short-range burst of glitter, presumably taken from Jackson’s iconic 1983 performance of “Billie Jean”. By holding the ‘A’ button he can perform a spin attack or throw his hat like a boomerang if the button is held a little longer. Holding ‘A’ longer still will capture all on-screen enemies in a dance sequence for a “smart bomb” effect, similar to the arcade game.

The animation below shows one of these sequences. Note that I have not reduced the number of animation frames and this is approximately the speed at which it is seen in the game:

Each level has a different theme. Michael must progress from Club-30 (the 1930s nightclub seen in the “Smooth Criminal” sequence of the film) to the street, through the woods / cemetery and a maze of caverns and finally the enemy hideout to confront the game’s villain Mr. Big. The short, final stage is a rudimentary first-person shoot-’em-up in the same vein as Wing Commander.

Moonwalker was heavily promoted by Sega in the UK, but what could have been a great arcade conversion was reduced to a below-average platform game that involves little more than wandering around opening doors. There are numerous special attacks, all of which are a bit pointless. Using the ‘A’ button immediately reduces the player’s energy bar, by a quarter to perform the hat throw and half to start the dance sequence. Although these are fun to watch, the dancing is only really effective against bosses; using it throughout the level is a waste of energy since (unlike the Shinobi games) the enemies constantly respawn. Even then, you have to finish off the boss with only half your energy left, so it exists to add challenge rather than help you out of a tight spot. It could be said that the dance sequences exist primarily to alleviate the boredom of an otherwise tedious game. Michael can also moonwalk by holding down the ‘B’ button; this is also pointless and does nothing apart from destroying some platforms that were otherwise there to help you. 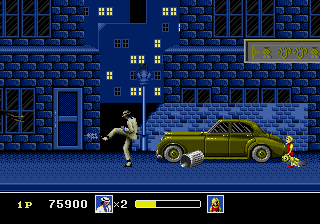 Continuing the theme of pointless gameplay twists, shooting stars very occasionally fall from the sky and catching one will turn Michael into a giant robot for a short time. Robot Michael can fly around the level and see which objects have children behind them. He can also fire lasers and missiles to destroy any bad guys lurking around. There is no real need to do this, since the enemies begin to respawn as soon as Michael goes back to normal, at which point you’ve probably forgotten which bits of scenery have children behind them anyway and end up searching them in turn as before.

The programmers squeezed a lot out of the Megadrive’s modest FM sound chip to recreate the songs, but the same brassy lead sound that replaces the vocal lines is used throughout and this becomes jarring after some time. Also, there appear to be some bugs in the music player routine in the final game, since the music stops briefly just before each stage’s boss character appears. Moonwalker was only a 4 Mbit cartridge, so there would be none of the long samples from Smooth Criminal as heard in the arcades. In fact, apart from the odd “Ooh” and “Who’s bad?” there were very few digitised sounds at all. Even Jackson’s trademark “Aaow!” is comically high-pitched, giving the impression that Sega were lampooning him rather than bigging him up. 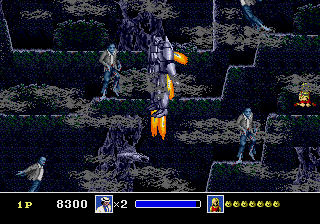 Although the backgrounds are detailed and colourful and the animation is very slick, the overall look of the game is often dull and repetitive. There is very little variation in on-screen enemies on each level, with only occasional palette swaps here and there. By the time you reach the third act of each level, it’s easy to become bored and just want to move on. The caverns level provides some relief in that there are separate caves to enter, breaking the otherwise linear format of the game. I’m not sure why the same sprite is used for all of the children, a little variation here would have made all the difference. The game’s physics are solid and it is reasonably challenging, but the same could be said about Alex Kidd and the Enchanted Castle and to be honest, I would rather play that. I wouldn’t miss the ten minute long sad trumpet rendition of “Beat It”. 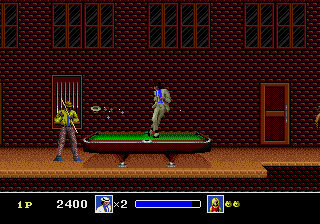 For some reason, I loved this game when it was first released. In fact, I was able to borrow a Japanese import copy of the game from a friend some weeks before its European release and went as far as to deface my beloved console’s cartridge slot in order to play it. I deeply regretted doing that and to make amends, shelled out £35 for a proper European copy to play on my now sullied UK Megadrive. To my dismay I found that my copy (which I now know to be REV 01) did not have the excerpt from “Thriller” in the woods stage like in the Japanese version (REV 00); that was my favourite bit! I had a love-hate relationship with the game for a long time and although I did play it through to the end, it never felt as enjoyable as it should have been. As a game in its own right, it is inferior in every way to the magnificent Revenge of Shinobi released the previous year and really doesn’t stand up too well today. Moonwalker is of cultural significance to Sega fans (and Jackson fans) of our generation, but fell way short of being a landmark title.

I still have a collection of Megadrive games today and own a mint condition Japanese copy of this. Would I get rid of it now that I’ve admitted to myself that it’s dreary rubbish? No. I spent too much of my childhood agonising over it for a number of reasons. I need it in my collection. It’s just another part of me… 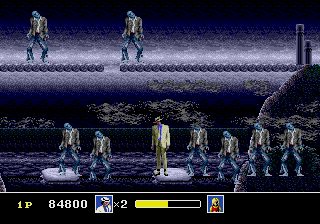