Koudelka is a kind of gothic-horror adventure game which spans 4 compulsive discs. Koudelka is a witch, and through her special powers she is drawn to a crumbling monastery which is inhabited by scores of terrifying spirits. Your job is to guide Koudelka through the passageways, halls and chambers of the building, helping her to fend off a whole host of monsters and ghouls as she tries to uncover the hidden secrets of the ancient spirits.

With its in-depth characterisation, and gameplay that is reminiscent of Resident Evil and Parasite Eve, Koudelka will appeal to gamers who like eerie atmospheres and the daunting challenge of role-playing games. With its beautifully rendered backgrounds, captivating cinematics and exceptional voice-overs, this game won’t fail to draw you in. 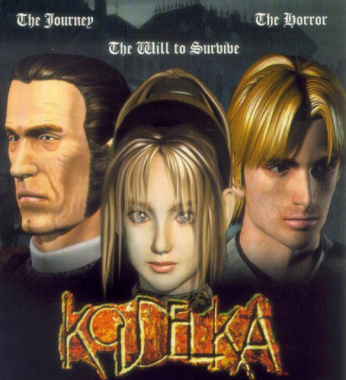 I’ve always been a huge RPG and survival horror fan. I’ve found that it’s hard to find a mix that can blend both genres together in a perfect symphony. But I have found one such game, which spawned two sequels and is the perfect balance of both.

Koudelka is a role-playing game developed by Sacnoth and published by SNK for the original PlayStation It was released in North America and Japan in 1999, with the European release in 2000.

The game’s developer Sacnoth was established in 1997 by Hiroki Kikuta with funding from SNK. Kikuta, best known for composing music for Seiken Densetsu 2 (released as “Secret of Mana” in the west) and Seiken Densetsu 3 for Square soft (now known as Square Enix) was unhappy with what he considered to be the disjointed, juvenile, and stagnant nature of most role-playing video games. Kikuta wanted to take the genre in a whole new direction. Unfortunately, internal quarrels within Sacnoth had led to a compromised product. Kikuta wanted to develop an action-based battle system, citing Resident Evil as a source of inspiration. However, his employees were adamant about releasing something similar to the games that Square had been making.

Leveling up is a bit different from the typical ways of Final Fantasy. The game allows you to select how you want to customize the characters’ abilities as you see fit since they each get four Bonus Ability Points per level. There are the typical STR (Strength), VIT (Vitality), DEX (Dexterity) and so fourth.

But there’s also a new one called PIE (Piety) which is like vitality and raises MP (Magic Points). However, it also has the effect of protecting the character, to some extent, from the effects of magic, good and bad. So while a character with high PIE will have more protection from harmful enemy magic, this will also apply to healing magic. So a character will have trouble healing someone who has very high piety.

Set in 1898 in Aberystwyth, Wales, the game follows mysterious occurrences surrounding Nemeton Monastery and the three protagonists who, by destiny, are sent to investigate its dark history. The plot is split up into various storylines that all intertwine with each other: the history of the monastery, the tragic fate of Charlotte, and Ogden’s past as the captain of the sunken ship “The Princess Alice”.

The main characters are Koudelka Iasant, a gypsy woman being summoned to the monastery by a mysterious voice; Edward Plunkett, a young man looking for adventure and money; James O’Flaherty, a bishop being sent to the monastery by the Vatican to recover an item of great value.

A manga side story, written and illustrated by Yuji Iwahara, was published in Kadokawa Shoten’s Monthly Ace Next. There are a few differences between the game and the manga. The only connection being the character of Koudelka, otherwise, it is an entirely new story. It could be viewed almost as a prequel to the first game or its own mostly-unrelated entity. The fifteen chapters were collected in three volumes.

“The Mansion’s Scream” is a novelization of the main story, written by Japanese author “Nahoko Korekata” (pen name?) and released in January 2000. Unfortunately, due to its rarity very little is known about it. What is known is that it expands somewhat on the character of Charlotte and goes slightly deeper into Koudelka’s relationship with Edward.

The game was adapted for a brief six-part radio drama by “Pony Canyon”. The first few episodes are set before the events of the game and involve interactions with original characters. The remaining episodes are a straight dramatization of the game script and the music is the same as that used in the game.

Koudelka is actually the precursor to the better-known Shadow Hearts series. Shadow Hearts takes place in the Koudelka universe and features various locales and characters from the game.

Despite not being as well known as the games in the series that followed, Koudelka has a unique atmosphere, gameplay and story that I recommend to anyone with an interest in RPGs, Survival horror and their history. It is an atmospheric, overlooked gem. But I don’t want to say any more to avoid spoilers, and because I want you to enjoy this game for yourself.