I’ve been playing Phantasy Star IV for the past week. It’s been on my backlog for some time and I decided to take a trip back to Algro.

Phantasy Star IV was released in the US in 1995 though it was released in Japan in December 1993. The cover art for the American and European releases was done by Boris Vallejo. He also did a few covers for video games, such as the PC game Dragon Wars (1989). To see more of Boris and his wife Julie’s art, head over to their official website. The Japanese/Korean cover art was done by Hitoshi Yoneda, who went by Yonesan, also did designs for Phantasy Star 1 and the covers for Phanantsy Star II and IV along with Sorcerian. He also did promotional art for Xanadu.

Phantasy Star IV takes place 1,000 years after the events of Phantasy Star II. After the Great Collapse, much of the once-thriving planet Motavia has been reduced to desert, and life has become progressively more difficult. To make matters worse, there has been an increase in the numbers of biomonsters. 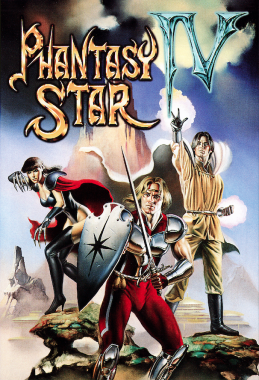 During an investigation into such an outbreak, Alys Brangwin, an experienced hunter, and her partner Chaz Ashley, her inexperienced partner, learns the relationship between the biomonster problem and the planet’s ecological crisis. The secrets of the Algol star system are revealed as Alys and company discover both the true cause of the threat to their worlds as well as the safeguards placed in a time long ago.

The game retailed just under $100 when it first came out. I remember paying $79.99 plus $13.99 for the guide when I saw it at babbage’s in the Cape.  I knew very little of it except for a blurb in Game Pro where the article was just one paragraph with screenshots of Alys talking to the principal at Piata Academy. I never saw anything with anime cutscenes before so I knew I had to get this game.

The game holds a special meaning for me. It’s the game that got me back into gaming. I was losing interest in gaming as nothing I played could hold my interest. When I first got this game, I begged my parents to rent a sega genesis at Blockbuster and a good portion of my time on vacation was playing this game. The opening theme was just so different from anything I ever saw. The music really got you pumped into starting this game and that feeling never really left. The whole game has an amazing score. Every part from the towns to the dungeons offers a mixture of fantasy meets sci-fi. One of my pieces is Rune’s theme.

The plot was a nice change from what I was playing. It actually felt that you were a part of the group trying to discover the truth. The writing was a nice departure from RPGS at that time.  It didn’t treat you like a child and actually made you think what the party was speaking about including npcs.  Every character had an actual personality and fits the group to a perfect T.

I literally laughed at the interactions with the party. Alys, especially, knew how to get what she wanted. And, it was very beneficial for the party. The scene with Grandfather Dorin will have you in stitches. Also, make sure you select “talk” option to watch the interactions between the team and give you clues if you’re stuck.

This is one of my favorite games and I will always recommend this to anyone who is looking for a fun yet rewarding game. This game ends the franchise so well and ties the events of Phantasy Star 1 and 2. I urge you all to run out and play this game.