Remember Blood Money? Sure you do! We all remember Blood Money; the frustration, the broken joysticks, the swearing… Menace, while not a direct prequel to Blood Money, is something of a spiritual forerunner, though mercifully much much easier. Developed by the same team who brought you that torture-fest (in fact, Blood Money’s intro features a voice sample, intoning “First, there was Menace…”), Menace was Scottish developer DMA Design’s first Amiga release. DMA would go on to bigger and better things with Blood Money the following year and of course the monster hit Lemmings in 1991. They also released a certain game in 1996 called Grand Theft Auto (maybe you’ve heard of it) so it’s nice to know that the creators of one of gaming’s biggest ever titles had their start on the Amiga.

Menace is a side-scrolling shooter, in the vein of R-Type. The plot sees the player in a short-range fighter being launched into the atmosphere of the planet Draconia, a world ruled over by six of the most fearsome alien rulers in the galaxy. These evil overlords have conquered countless worlds and used the technology and lifeforms from those planets to build Draconia.

The game is split into six zones, each with a specific theme. At the end of each zone waits one of the alien rulers, whom the player must defeat before progressing on to the next level. There are two difficulty modes from which to choose: Rookie mode allows you to touch off the scenery without any loss to your shields. Expert mode sees yours shields depleted, albeit slowly enough, on contact with the scenery although your score will be doubled.

After a brief intro which sees the player’s ship launched from a giant space slug’s head (the manual states that these slugs are found to roam near Draconia and so offer a discrete way of entering the planet’s atmosphere) the player is launched into the thick of the action on the first level, the Sea of Karnaugh. This is an underwater affair with your opponents taking on a mostly nautical guise, Including whale-like creatures and swarms of giant jellyfish. Most of the attack waves have a set pattern so they’re not too tricky to deal with.

If the player successfully destroys an entire attack wave, a 1,000 bonus points icon is left behind, which will eventually float off screen. The player can collect the bonus by flying over the icon but, by shooting the icon repeatedly, they can also collect weapons and power-ups for their craft. Every five shots pumped into the icon will produce a different weapon or power-up. Cannons are the first addition offered, followed by lasers. Once both of these weapons are added to your craft, you’ll soon be slicing your way through the opposition. However, neither the canons or lasers last indefinitely. They’re gradually reduced as you fire, so you’ll need to keep them topped up by completely destroying as many attack waves as you can. Other power-ups include outriders which are attached to the top and bottom of your ship (you’ll have to collect each separately), a speed-up icon which makes your ship zip around faster, a temporary shield and finally a complete shield regeneration power-up.

The guardian at the end of level one resembles an enormous octopus which sends out giant… well, look at the screenshot below and judge for yourselves. Keep aiming for the monster’s sole eye and eventually it bites the dust.

Onto level 2, and the Vanguard Warzone sees the player battling through a futuristic, mechanoid-style landscape. Again, similarities to Blood Money spring to mind. It’s more of the same on this level, with attack waves of aliens appearing in turn, though they’re completely different in design to their level one underwater counterparts. 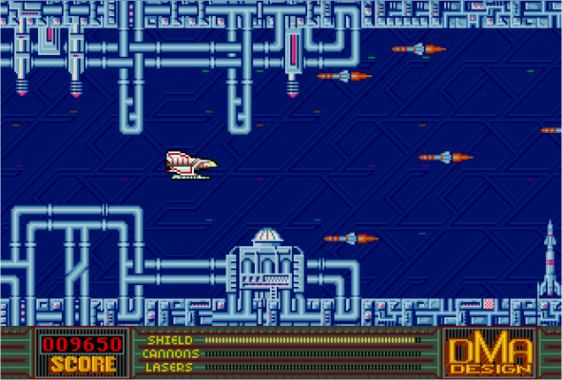 The Carnage Rift (we really love the names used for each level) is the next stage to conquer and things get a bit trickier from here on. The aliens’ attack patterns, while still mostly predictable, become more difficult to avoid. However, if your craft is kitted out with all the bells and whistles, you shouldn’t have too hard a time getting through. The ability to regenerate your shield by shooting the bonus icon is a real boon, although you’ll have to time this quite carefully. It’s all too easy to miscalculate the amount of shots required (especially if the icon is bearing down fast on you) and end up with another speed power-up, or cycling the icon back to the beginning and ending up collecting cannons again.

The Tropics of Mace sees the player battling their way through a steaming rainforest. All sorts of giant bugs soon descend on the player. At this stage, your ship should be pretty well kitted out so there’s little danger of not making it through. The penultimate level, the Ruins of Kruger sees the difficult level increasing slightly, with enemies appearing that can’t be destroyed. The player must instead take out (or dodge) the projectiles launched by these indestructible foes. The final level, The Plateau of Draconia, is pretty much more of the same, though it’s probably our favorite level graphically. Battle your way to the end of the Plateau and you’ll meet the final boss, though like most of the guardians in Menace, he’s a little too easy to dispatch.

Menace is a bright and colorful shooter and features some beautifully drawn sprites. There’s a slightly muddy look to the palette in some of the levels, especially on the first stage, although things improve in later levels. However, the scrolling is super-smooth, with some nice parallax effects, and the sprite animations are top-notch.

The Amiga’s sound chip is put to good use too. The opening track is particularly memorable; written by Dave Whittaker (who scored many other Amiga titles including Shadow of the Beast and the classic Speedball), it’s an unusual, moody piece which certainly grabs the ear.

The in-game track is also fondly remembered by most Amiga shoot-‘em-up fans though, as with Blood Money, the same track is used on each level so you might find yourself reaching for the sound  toggle button after a while.

We’ve always had a bit of a soft spot for Menace. It’s not quite a classic; it’s a bit too shallow and short to offer anything more than a derivative blast, nor does it really push the Amiga’s hardware to the limit. It’s also too easy; even the least accomplished shoot-’em-up player will have little difficulty in completing the game and the end of level guardians put up a distinctly lacklustre fight. But it’s slick, relatively addictive and was, as debut games go, an extremely impressive effort from the Dundee-based developers, who clearly understood the Amiga’s hardware. It also proved a valuable learning ground for the team’s next title, Blood Money, which would really showcase the Amiga’s graphical and audio capabilities. Despite its slight nature, Menace is a solid, dependable entry in the vast array of Amiga shooters and always fun for a half hour’s mindless blasting.