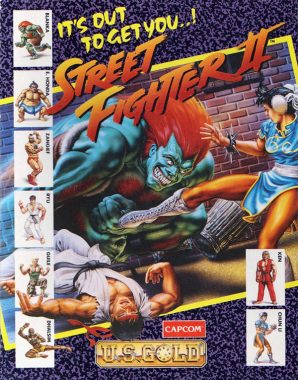 Having set a new standard for scrolling beat-’em-up games with Final Fight, Capcom went and made a sequel to their rather forgettable one-on-one fighting game Street Fighter (1987); the rest is history. Street Fighter II: The World Warrior burst into the arcades in 1992, leaving crowds of gamers awestruck and noticeably short on change. Not only did it look and sound fantastic, the game’s mechanics were faultless; the combo system and a wealth of special moves rounded off a virtually perfect fighting game. Street Fighter II became less of a video game and more a way of life for beat-’em-up fans in the early 1990s.

Nintendo scored a huge win by securing an exclusive console port for their new baby: the Super Famicom (SNES). It was a great conversion but it cost a whopping £65 when it was released in the UK. Even if I could have save up that sort of money, there was absolutely no chance of me getting a SNES because I had already done a deal with Satan to get myself a Megadrive a couple of years earlier. But there was still a chance to play this amazing game at home by dusting off my good old Commodore 64. Yes, Street Fighter II was getting an 8-bit port courtesy of U.S. Gold. My expectations weren’t high, but graphics and sound weren’t everything and if it played even a little bit like the coin-op I would be happy. I was about to be very, very disappointed and to make matters worse, I went and bought the tape version.

Vintage game reviews are all about the ones we absolutely loved, right? What would be the point in writing about a rubbish one? For me, the C64 version of Street Fighter II is curiosity because it never should have existed. But it did exist and I paid good money for it, which I’m still slightly annoyed about to this day.

I shan’t go on about the arcade game for too long since everyone knows what it’s about. Suffice to say it had a unique six-button control system: low power (faster), medium power and high power (slower) punch and kick. The player uses joystick and button combinations of varying complexity to pull off special moves such as projectile attacks, multi-hit combos and such. The collision system is so perfectly tuned that players were still discovering new combos several years after its release. You choose one of eight very different fighters and must beat the other seven in turn (best-of-three rounds). Then you must defeat the four non-selectable “boss” characters in order to complete the game and enjoy your fighter’s unique end sequence. The sprites were huge and beautifully animated, the backgrounds were detailed and colourful and the soundtrack was magnificent. So how much of that was possible with 64 KB of RAM?

A message on the title screen reads “DUE TO THE LIMITATIONS AND SPEC. OF THIS MACHINE SOME OF THE IMPLEMENTATIONS CONTAINED IN THE MANUAL MAY BE INCORRECT”. This is basically saying that the instruction manual covers all of the other home computer versions of Street Fighter II, none of which bear little any resemblance to the program you’ve just loaded. Shouldn’t this have been printed on the box? At least it has a title screen and a recognisable SID rendition of the music from the arcade game is playing (although it is the music from the character select screen and not the intro). You start the game and there is the familiar character select screen, although the music has now changed to the intro theme. You get the feeling that attention to detail wasn’t high on the agenda here. 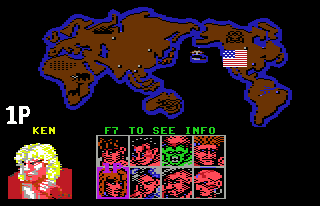 Obviously it would be unreasonable to expect the C64 – more than 10 year old hardware by this point – to come close to the arcade game in terms of graphics and sound, so it would have to be all about the gameplay. After a lot of loading (and I mean A LOT of loading, even compared to earlier U.S. Gold coin-op conversions such as Turbo Out Run), we’re up against Ryu. The first thing we notice is that the game is quite slow, but why isn’t my opponent fighting back? Did I select a two-player game by mistake? Oh wait, there he goes. The character select music is still playing and it’s the same eight bars over and over, which is starting to annoying me. So how do you do the special moves? Oh that’s right, the manual is of no use to C64 people. Let’s just waggle the joystick around and spam the hell out of the fire button… and I’ve won. More loading; I’m sure the next fighter will be tougher to beat just like the coin-op. Hmm, no, he isn’t. This is just awful, but let’s just try to at least a bit of fun out of it. Now I am stuck in mid air for some reason.

Okay, so compromises were inevitable. There wasn’t even enough memory for a custom font, hence the good old ROM character set from 1982 is all over this one. The fighters had to be severely scaled down minimise sprite data, consequently they are all drawn in chunky multi-colour mode and Chun Li is somehow taller than Zangief. Only the bare minimum frames of animation are used and the play field is reduced to a raster split just 120 pixels high. Each character has to be separately loaded into memory and unlike the coin-op their order is fixed – even for the disk version. The backgrounds appear to have been hastily converted from another format and they are really messy (I mean, look at Ryu’s stage). They look as if they were imported into Art Studio and left as they were; nobody even took the time to clean up the attribute clash. Decent pixel art might have made a real difference here. 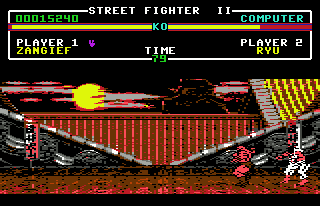 I had wondered if the programmers would assign keyboard keys equivalent to the arcade game’s six buttons (much like the three keys used by Ocean’s conversion of Renegade) but no, it would be a single fire button only. Just a handful of the special moves are there and the way they are executed is simplistic and a bit random. For example, playing as Ken you push forward on the joystick and press fire to do a hurricane kick, then (and only then) can you push back on the joystick and press fire to perform a Hadouken, by which point you’re so near the edge of the screen that the fireball is off the screen almost immediately. There is no dragon punch here, no cannonball spin for Blanka and no flash kick for Guile. None of the throw or hold moves can be performed in this version either, so we begin to wonder why they even bothered. Even if we pretend that this has nothing to do with Street Fighter II at all, it is difficult to glean any enjoyment from playing this game. Look at the animated screenshot; note that none of the blows appear to be landing and the Sonic Boom goes right through Ken. The gameplay also seems to speed up and slow down constantly and the movement of the sprites is not fluid like we used to see in C64 games. Worse still, due to the practically non-existent AI you can complete the game without any real strategy at all. 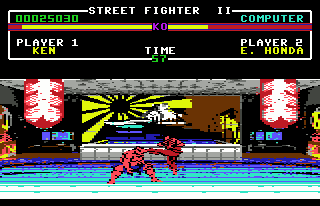 But let’s take a moment to consider the good points. All the characters and backgrounds are there, the character animation is recognisable from the arcade game and there is a one-on-one fighting game in there somewhere. At least some effort went into making the game look like Street Fighter II. The programmers tried hard with the sprites, but if they could have saved even a little bit of the gameplay then two stick figures fighting might have been more appropriate. The worst thing about all this was I still had a lot of love for the old Commodore 64, even a couple of years after splashing out on a Megadrive. With Nintendo going is far as to mock us with magazine spreads bearing the words “Street Fighter II: Sega owners dream on” I couldn’t help getting my hopes up a little. Once I accepted how bad this conversion was, it really felt like I was done with the C64 forever, like it had nothing more to offer. This once wonderful games machine had been reduced to the level of gameplay you might expect from one of those Tiger LCD handhelds of the time. With a heavy heart I stowed and C64 under the bed and would spend the next few years playing with consoles and hemorrhaging money to Sega. Thank the Lord for the Special Champion Edition! 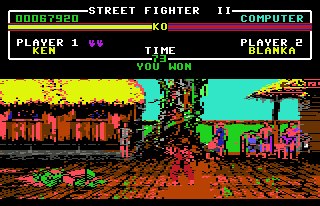 There are of course a number of really good one-on-one fighting games on the C64; International Karate for example is a masterpiece. However, this is a much simpler game designed for one-button joysticks, with only one design of fighter and a fixed set of basic moves. The major difference is when you land a punch it connects, it feels right. There is a pleasing difficulty curve, you want to keep playing it. This conversion has none of those qualities; it was to the arcade game what the Atari 2600 version of Pac Man was to its arcade parent. People would buy it on the strength of the licence alone, so who cared if it was any good or not? We all know how that ended. I remember the day I went out to buy this; I was feeling unwell with one of those odd sore throats that gets progressively worse until you find yourself dying of man flu. By the time I’d got it home, loaded it and played it for long enough to conclude that it was absolute garbage, I felt so ill that I went to bed. A fever set in and I was haunted by nightmarish visions of this awful game for a couple of days. I kept waking up, feeling a bit sick and wondering if the game really was that bad or just one of my flu-induced coma fantasies. When I felt better, I loaded the game back up again and felt so depressed I needed to go to bed again.

I couldn’t help feeling that U.S. Gold – by whom some of the very best games for the C64 had been published over the years – had sold us down the river on this one. They must have paid big money for the licence and weren’t going to waste time trying to do the impossible and make the 8-bit versions great, since most serious gamers had already moved on. It was limited as much by the amount of time and money the publishers were prepared to spend on it (i.e. not very much) than it was by the hardware. If I may resort to using old-school vitriol here, it really didn’t need to be the pus-filled boil on a diseased monkey’s ball sack that it is.