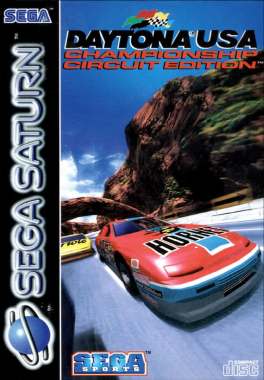 The Sega Saturn version of the original Daytona USA (released in 1995) was a superb arcade racer that whilst not arcade perfect was amongst the finest racing games available on the console.

The following year Sega released a follow up Daytona USA Championship Circuit Edition, this game fixes some of the flaws in the original but sadly brings new problems at the same time.
Firstly the good, the graphics have been cleaned up considerably. The original game had terrible pop up and glitching and this game fixes all of that giving the game a lovely smooth almost PC like appearance. The number of cars has also been increased and best of all there are several new tracks (including my favourite track Desert city).
On the down side though this game plays about 15% slower than the first Daytona which really takes away some of the fun. The handling of the cars is affected also feeling very twitchy and slow to respond. Worst of all the classic music tracks from the earlier game has been replaced with awful remixed versions of 1980’s rock. 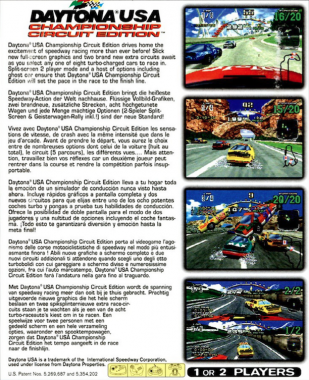 Despite the many flaws I would still recommend this game to fans of arcade racing games, it is cheap and easy to find but I would definitely pick up the original game first.