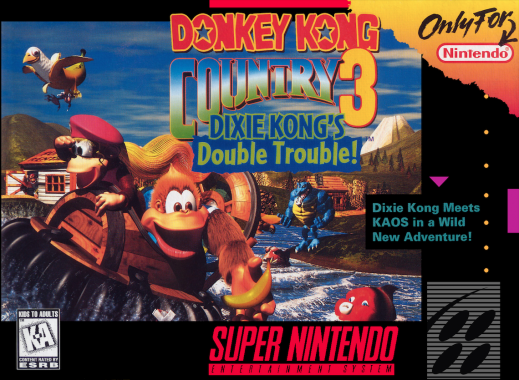 Released in late 1996 Donkey Kong Country 3 was the final game in the series on the Super Nintendo and despite not being as good as the earlier 2 games it is still a classic 2d platformer.

The graphics are the same very high quality CGI that we have come to expect from the series (still hard to believe that this game is on Super Nes and not Nintendo 64). The soundtrack is also amazing composed by David Wise (who also worked on Battletoads) and Eveline Fischer (who also worked on Perfect Dark).
The gameplay is solid gold featuring a mixture of standard 2d platforming fair running and jumping and using barrels and some more on rails sections similar to the mine cart levels of the previous games. There is also an increase in underwater levels here with swimming being a major part of the gameplay towards the end.
A new character is introduced here Kiddy Kong (essentially a giant toddler Gorilla) he handles similar to Donkey Kong Himself, very good for disposing of large baddies but not so good for jumping or running (this is where cousin Dixie comes in).
So why is this game not as good as the earlier game? Well for me it is because most of the levels are simply redesigns from the earlier games with different backgrounds and a slight change in enemy placements. Nothing wrong with that but as a result this game feels a little tired. It did not help that the Nintendo 64 launch was around the corner and by this time we had all seen the gameplay footage of Super Mario 64 and this game looked pale in comparison. 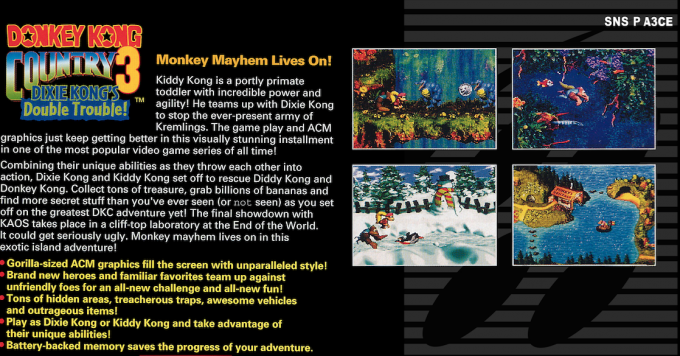 I would still recommend this game to any Super Nes owners although it is hard to find and pricey, however it is available on the Wii U store for a few pounds.