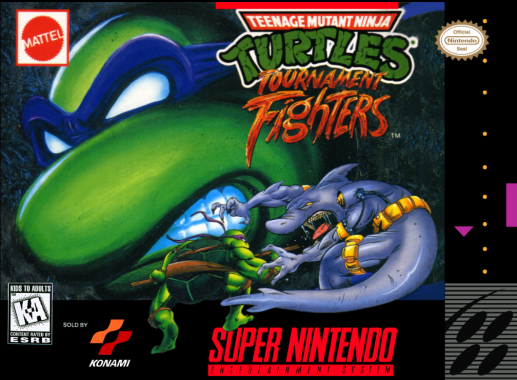 During the early 1990’s 2 of my favourite things were Street Fighter 2 and The Teenage Mutant Ninja Turtles, so when I heard there was a game that combined the 2 I was naturally very excited.

Teenage Mutant Ninja Turtles: Tournament Fighters was released in 1993 for the Super Nintendo and is totally fantastic and was a real change of pace for the Turtles as their previous games such as Turtles in Time were scrolling beat em ups and this game is a one on one fighter.
There are 10 different fighters to choose from including all 4 Turtles and the evil Shredder, there are also 2 boss fighters Rat King and Karai. Unlike other one on one beat em ups of the time this Game also has a story mode involving April O’ Neil and Splinter being kidnapped by Shredder and you as the fab 4 have to track them down using the Turtles Blimp.
The graphics are superb (even better than Street Fighter 2 Turbo) and the soundtrack is also of a very high standard with several of the tunes from the TV series recreated very well indeed. 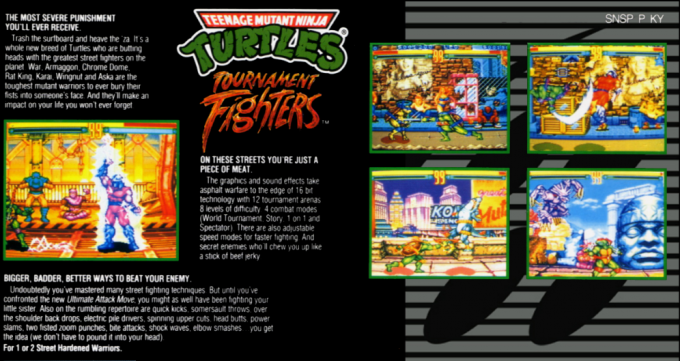 Any negatives? Not much except there are no that many moves available for each character especially when Compared to the Street Fighter series and also each of the Turtles really plays almost identically (but that I suppose is to be expected).
All in all I would recommend this game to any fans of the Turtles or any fans of the beat em up genre although sadly it is expensive to buy these days often going for upwards of £30 on most auction sites.