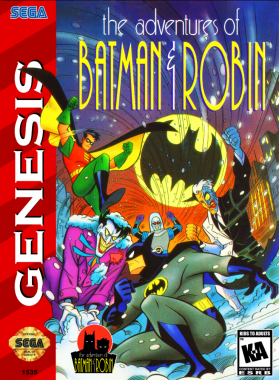 Released in 1995 for the Sega Megadrive The Adventures of Batman & Robin is a superb scrolling shooter/platformer based on the Animated series of the same name.

The plot here involves the dynamic duo attempting to stop Mr Freeze from taking over the city, in addition to this Batman and Robin must also dealt with regular bad guys including The Joker and Two Faced. The game can be played by a single player or in two player co op mode where one player controls Batman and the other controls Robin.
There are 4 basic levels to complete although each level consists of several different stages, the majority of the stages involves beating up bad guys in a 2d left to right perspective with a boss battle at the end although on occasion the action switches to scrolling shooter (similar to Thunder Force) where you control the Batwing.
The graphics are lovely and are almost identical to the classic cartoon series it is based on, the game also features an excellent soundtrack by Jespar Kyd (a Danish soundtrack composer who later worked on the Assassin Creed series). 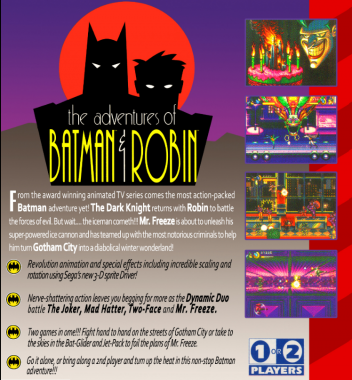 On the negative side this game is far too hard and as a result it will frustrate many, also the controls are fairly unresponsive especially during heavy combat and on occasion the game really slows down (very rare for a Megadrive game).
Despite the flaws this game is well worth picking up if you enjoy this type of game or if you are a fan of the Dark Knight, sadly though this game will set you back upwards of £40 on various auction sites.