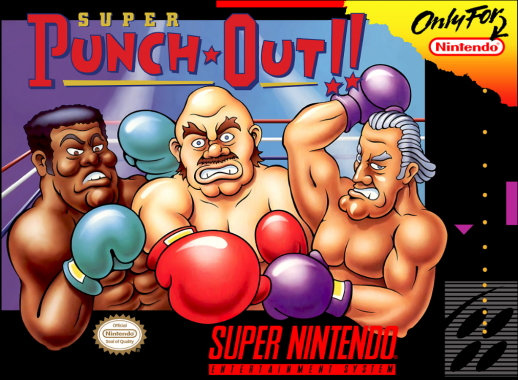 Released in late 1994 for the Super Nintendo Super Punch Out is the sequel to the legendary Mike Tyson’s Punch Out on the original Nintendo and whilst this game is not as good as the earlier release it still has much to offer.

Firstly the graphics are superb, big chunky sprites and cartoony graphics which are displayed from a “Behind the back” camera angle (including a fantastic transparency effect where you can see through your fighter in order to properly see where your opponent is).

The control system is also excellent and very easy to pick up, it is very easy to throw punches and jabs to both the body and the face as well as being able to dodge punches from your rival.

Best of all though is the gameplay it is tremendous fun essentially playing just like an Arcade machine. Each bout is really fast paced and fun, you have 3 minutes in which to knock out your opponent (if you cannot win by knockout you lose as there is no option to win via points). The aim of the game is to rise through the ranks from the amateur circuits right up to the top tier and eventually become World Boxing Champion. If you lose a fight you are immediately given the option to continue and have a rematch (although thankfully unlike the arcade machine you do not need to put another pound coin in at this point). 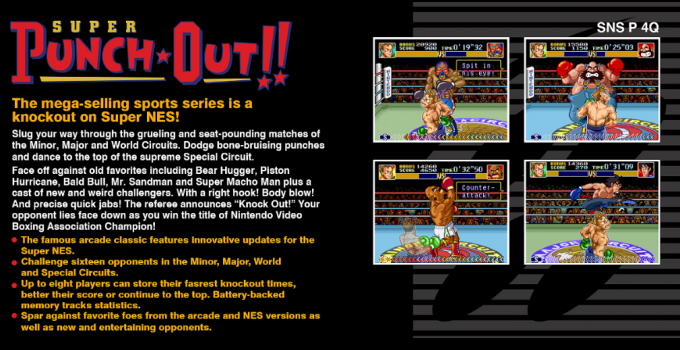 On the negative side for whatever reason this game just does not have the same sense of fun and silliness of the earlier games, I think partly down to the rival fighters not having the same charisma as before (such as the hilarious Glass Joe and Piston Honda from the Nes game) and also the bland soundtrack.

That aside this is still a great game and well worth picking up, sadly this game is expensive to buy and hard to find but you can buy it on the Wii and Wii U virtual console for just a few pounds.