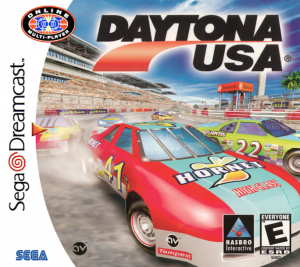 Released in late 2000 for the Sega Dreamcast Daytona USA 2001 is essentially a top quality compilation featuring the best bits of the original Daytona USA and Daytona USA Championship Circuit Edition.
This game has all the tracks from both the earlier Daytona games including Three Seven Speedway, Desert City and Dinosaur Canyon plus some completely new tracks such as Mermaid Lake and Rin Rin Rink.
The graphics are fantastic, massively improved over the original games with huge chunky cars and textbook Sega ‘Blueskies”. The soundtrack is also superb featuring both original music from the original game and some remixed tunes also (including the now legendary ‘Lets Go Away’).
Another major upgrade is the addition of a basic career mode called ‘Championship Mode’, here the player has to finish in the top position on each race to progress further into tournaments and win the ‘King of Daytona Cup’, this adds greatly to the replayability of the game. 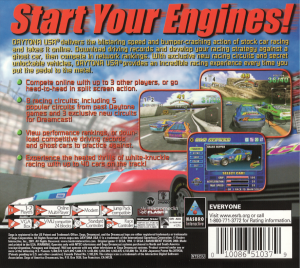 There are a few issues that let the game down though, firstly is the uneven difficulty levels and worst of all the controls. If you are playing on a standard Dreamcast pad the game is near unplayable with very twitchy analogue steering resulting in the car frequently going off the road. The controls are apparently better if you use a steering wheel but I confess to never having owned one for the Dreamcast so I cannot say for sure.
Overall I would say this game is worth picking up if you love arcade racers but beware this game is hard to find and expensive (usually costing over £30). One piece of trivia this was the very first console game to use Broadband systems for multiplayer!