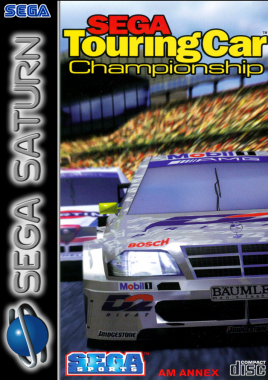 Released for the Sega Saturn in 1997 Sega Touring Car Championship is a very good conversion of the arcade game of the same name and whilst this is not in the same league as Sega Rally or Daytona USA it still has much to offer.

For starters the graphics are excellent with big chunky cars and very attractive tracks with textbook Sega blue skies, the soundtrack is also typically high class.

There are 3 courses to complete which are “Brickwall Town”, “Country Circuit” and “Grunwalt Circuit” and all of them are based on real location’s from the German Touring Car Championship or DTM. It is also possible to unlock a 4th bonus track (although I never have). There are a massive amount of cars to choose from here (10 compared to the Arcade version’s 4) including 2 cars ported over from Sega Rally ( The Lancia Delta HF Integrale and The Toyota Celica GT – Four). 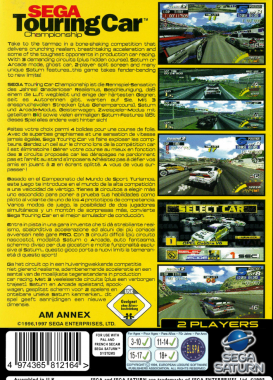 Any bad points? Well, the handling is extremely twitchy compared to Sega Rally ( I have heard that a Steering Wheel improves things massively but I have never got around to trying it).

That aside I would still recommend this game to any fans of the genre, just make sure you get Sega Rally and Daytona USA first.