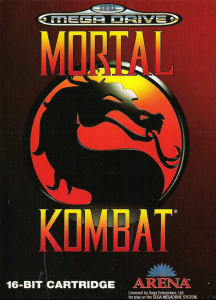 Name a game that sold TWICE as many copies on the Sega Genesis than its Super Nintendo counterpart? MORTAL KOMBAT!

Ok I am NOT going into a techno fit here (although tempting). But one of the first if not THE first game to develop the ESRB rating for future ratings (at least for the NTSC region…GEG is American, folks 🙂 )

Looking back this game is/was a pioneer in its day! WHY? Because of one thing? BLOOD! Yes this is one of the first games to show blood (more so in the Arcade/Sega versions) when you punched/kicked your opponent on screen and you can also perform fatalities against them as well. Whether it was the kiss of death, ripping out their spines, or freezing them and then punch them into oblivion (among others), American parents were skeptical to give quarters their to children that was potentially exposing them to violence.

Story (in a nutshell):

Every generation, portals to the realm of Earth open to/from the forsaken realm of Outworld. Warriors from each realm are chosen to represent their respective realm to fight in a sacred tournament called Mortal Kombat. The current

Shang Tsung (with the help of Goro: the reigning champion) has won 9 straight Mortal Kombat victories for the honor of controlling the realm of Earth (Earthrealm in future titles). A 10th victory will secure rights to enter Earth with no opposition.

You had 7 (6 on Game Boy) characters to choose from to play the game with:

Liu Kang: A Shaolin warrior chosen to represent the Temple of the Order of Light The host for the tournament on Earth: parodied from Kwai Chang Kang from the American TV series Kung Fu.

Johnny Cage: The Hollywood Superstar; parodied from Jean Claude Van Damme and Bruce Lee… Due to space limits, he is omitted on the Game Boy version.

Sonya Blade: She was forced to enter the tournament to save her unit. Also on the hunt for the notorious thug Kano 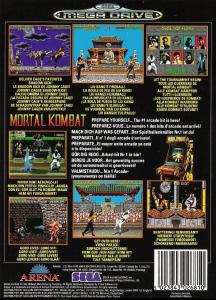 Raiden: God of Thunder and protector of the realm of Earth

Sub-Zero: a Lin Kuei Ninja on a mission to assassinate Shang Tsung and steals his wealth

Scorpion: A non-dead warrior hellbent on assassinating Sub-Zero for his murder.

Kano: A merciless, greedy thug who wants to plunder anything he gets his hands on (a wanted criminal in over 35 countries)

As a nine year old: THIS GAME ROCKED! I remember having a Game Boy version and all versions of the game were CGI’ed into it: well digital actors but the CGI was in its early technology and with all the gore (oh the gore). In home versions of the game, you can turn off the blood settings, but in my opinion, it’s definitely not the same.

In short, this game is a must for all of you fighting connoisseurs out there so go download it today!