Published by
SEGA of America, Inc.
Developed by
Team Shinobi
Released
1991
Also For 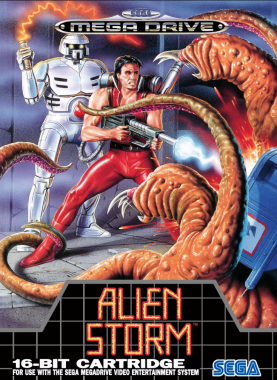 Released in 1991 for the Sega Megadrive Alien Storm is a superb side scrolling beat em up converted from the Arcade game of the same name.

The gameplay here is very similar to Sega’s other classic scrolling Arcade beat em up Golden Axe except it swaps the Western Fantasy setting for a 1950’s American B Movie setting. You can chose from 2 different characters and then attempt to save the world from evil alien invaders.

There are 8 different levels to complete ranging from the Streets of the USA right up to the Alien Mothership itself, each level is quite similar and involves you shooting loads of alien scum! Each character has several short range attacks such as basic kicks and punches and also a designated weapon (for example a Lighting gun although ammo for this is extremely scarce in later levels). Each character also has the option of a special attack where they can call in reinforcements if outnumbered (such as calling in a airstrike on a large number of baddies).

On occasion the action switches from standard 2d scrolling to a basic 3d shooter such as when you enter a grocery store to replenish health supplies but must first rid the store of the alien menace. 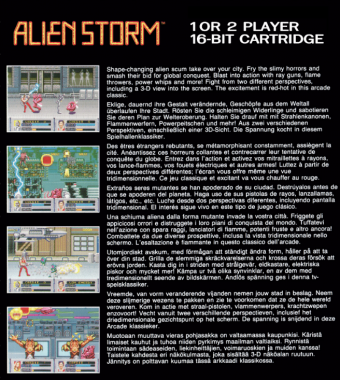