You know the old catchphase “Anything you can do I can do better!”, well with regard to the Sega Saturn version of the Playstation classic Wipeout it should read more like “Anything you can do I can do almost as well!”
When I first heard that Wipeout ( a futuristic racing game) was being converted to the Saturn I was not really interested, this was due to the dogs breakfast that was the Saturn version of Daytona USA. If the Saturn could not handle Daytona USA then how could it handle Wipeout (which was far more graphically intensive and much faster).
To my eternal surprise the Saturn version is superb! The graphics are lovely, almost identical to the Playstation version but with the very occasional pop up and slightly wobbly scenery. The sound is just as good with a fantastic soundtrack although unlike the Playstation version which featured tracks from Chemical Brothers and Leftfield the soundtrack here was composed entirely by Cold Storage (an in-house development team at Psygnosis) 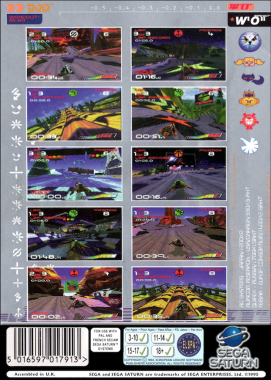 The gameplay is also spot on with fantastic handling and the usual high quality track design, infact if anything the controls on this version are even better than the Playstation version due to the awesome Saturn controller. On the downside this version despite being very quick it is clearly a few frames per second slower than the Playstation original, also the draw distance is reduced here meaning that sometimes you cannot see very far ahead and as a result may crash frequently.
Despite these flaws this game is still a classic and I would recommend it to any fans of the genre, it is cheap and easy to pick up.