Released in the year 2000 Ridge Racer 64 was the long awaited debut of the series on a Nintendo console, arriving some 5 years after the Playstation original. Despite the long absence this was definitely well worth the wait as this game has everything that an arcade racing game should have.
Firstly the graphics are superb (much improved over the Playstation versions) with a fantastically expanded colour palette which makes the whole game look gorgeous, big chunky cars and superb colourful tracks and backgrounds. The soundtrack is also great especially considering that this game is on cartridge and not on disc. Indeed, this game contains all the original music tracks from the earlier Playstation versions (some of which have been remixed) and some completely original tracks created just for this game. 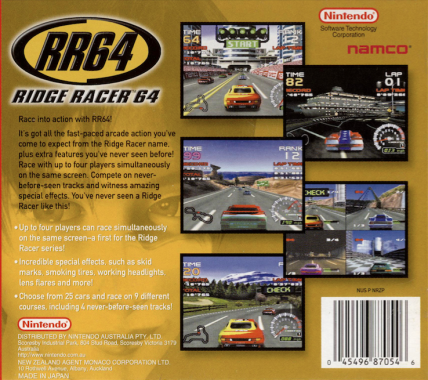 The handling is classic Ridge Racer full of powerslides, the N64 controller is brilliant for games like this due to the fantastic analogue stick.
There are 20 tracks to complete compared to the Playstation’s one track (although admittedly many of them are simply reworking of the same track) and a massive 32 cars to drive with 4 available straight away and the rest unlockable in the championship mode.
Overall I would say that this game is an all time classic which gets unfairly overlooked due to the console it is on (if this game had appeared on the Playstation it would be far more critically acclaimed).
One piece of trivia, this game was the first ever Ridge Racer not to be developed directly by Namco, it was developed by Nintendo Software Technology.