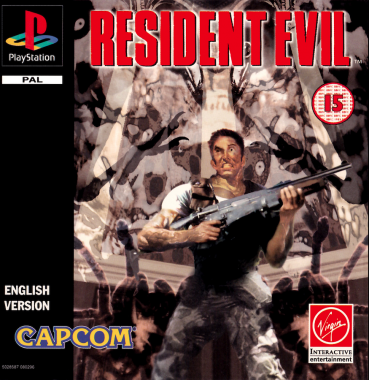 With all due respect to Alone in The Dark, Resident Evil was the game that kick started the Survival Horror genre. Released in 1996 on the original Playstation Resident Evil was like no other game ever released dripping with atmosphere and menace!
Essentially a 3rd person shooter with puzzle elements you play the part of either Chris Redfield or Jill Valentine (both members of S.T.A.R.S or Special Tactics and Rescue Service Team). You must go to Racoon city to investigate the disappearance of several other members of your team who were investigating a series of grizzly murders.
After the helicopter you are travelling on crash lands you are forced to seek refuge in an abandoned mansion. Here you discover the source of all the troubles, with zombies, monsters, undead dogs and other horror’s lurking around every corner. The tension is huge (especially considering that ammo is so scarce, more often than not you have to run away), in addition to shooting monsters you must also complete several puzzles in order to advance and you must also keep a look out for ink ribbons to save your progress on the typewriters found throughout the mansion. 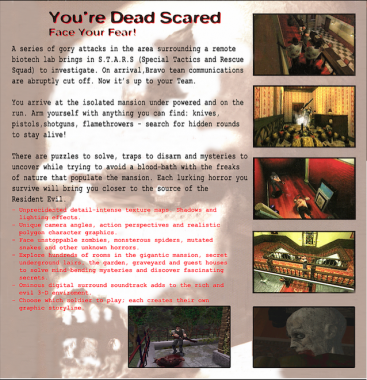 Whilst this game was a revelation back in 1996 the game has aged very poorly. For starters the camera is horrible, on many occasions you are fighting a zombie and all of a sudden the camera will pan around and you cannot see anything leading to the zombie killing you! Another problem is the terrible controls, compared to modern games the controls in Resident Evil are very sloppy. Aiming your weapon is very hard and it is very hard to get your character to move in the right direction.
Despite the problems though this game is an undeniable classic! If you enjoy Survival Horror games today you must try this game to see where it all began.
One piece of trivia this game is known as Bio Hazard in Japan.