So after two years in the making, this fan based documentary is finally here or will be very soon. Just waiting to get some publicity on it and then we’ll finally unveil it onto YouTube, Vimeo etc. The idea was after working alongside Allister Brimble on his Amiga Works album and being Executive Producer, I had created/worked on the entire website and also did as much marketing for it. I even managed to get a full entire track from the album played on commercial radio, not many video games composers can do that unless its on something like Classic FM, with a dedicated programme. The Amiga Works documentary covers some of Allisters career throughout becoming a hit on the Amiga and playing on through those days at Team 17 which we become to learn and love the super sounds he produced.

There are many textual and video based testimonials on this documentary, some from legends who still work in the industry today, some who work behind the scenes bringing us retro projects and not forgetting the fans themselves.

I want to say a MASSIVE THANK YOU to all who have contributed towards this special project of mine and if anyone would like to contribute a donation towards this please message me privately.

There is a possability of having this documentary involved with another project but its in the negotiation stages right now – watch this space!!!

Listen out for more on the work through various interviews via social media and YouTube/Soundcloud its hoped very soon. If anyone would like to cover this for an article, review or chat more about the project again please get in touch.

This documentary is also dedicated to Lynette Reade and Intex, Allisters mum and the voice of Intex Systems in Alien Breed amongst other games too on the Amiga. 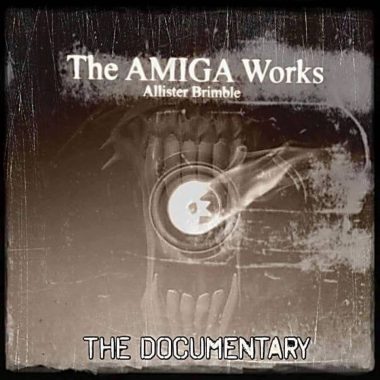 So… I remember that day when I first loaded up Rock star ate my hamster and thought the way you could setup your band was amazing, back then it was such a novelty idea. Never thought the fact the music meant anything to me later in life, but it’s amazing I still play the game today. Fast forward when the likes of Full Contact arrived by what looked like a refreshing games company and then the music hit me, absolutely gobsmacked and thought game music was just awesome. I began recording my favourite tunes off games onto tape and listen to them in bed, weird as it sounds but then again maybe not as other Amiga retro fans did the same back in my day.

I then remember Alien Breed and my Amiga life just got so much interesting, I remember listening to the full 16min version of the title tune and could not get away from it, and I was only 12. Not many of that age today would be able to appreciate such in depth and rich gaming music.

I started to follow Allister very carefully and on each and every game listening and recording all his music probably along with many others at the time and they included music by other legends such as Tim Wright, David Whittaker, Barry Leitch, Patrick Phelan, Bjørn Lynne and a boatload more.

Then I heard shortly after Allister was releasing a tape, I bought it and in fact I was the first to buy and been his no. 1 fan ever since and he knows this. When many years passed by I tried as much to reminisce and checked Amiga retro sites such as Lemon Amiga and Amiga Remix.

I got hooked again bringing back so many memories and I was also looking by chance to see what Kickstarter and Viva Amiga was all about, unlucky for me I missed out on being a backer for that project and the Turrican Anthology but then I was on it in terms of keeping alert knowing this was the place to create fun projects as well potentially relive memories as I started to see even older games being redone and rebooted again. Then the Amiga Works arrived.

Backed it immediately and got Executive Producer credit however I didn’t just want the title, I wanted to be part of it somehow to help Allister achieve the goal and start looking at ideas. I marketed the album, got it all over social media, created the website and content such as testimonials from legends like Matt Furniss, Martin Brown and Tim Wright.

I also created the shopping cart once we knew what we were able to sell after the project had been funded and ended for a while. Being able to pitch my ideas back to Allister was a dream and this was my first project at helping my favourite games composer, couldn’t believe it really. But I didn’t want to stop there, I saw something on the back of the Turrican Anthology and wanted to St first create a trailer for the album and use it at the beginning of the website. But then after that I thought to myself I could probably do a bit more with some help from fans if they were willing and anyone else I could have support from to create what became the Amiga Works documentary. A 2.5hr film not funded and created by only myself with no help apart from one or two contributions towards the artwork/animation etc.

The rest followed as testimonials came in both textual and face to face but who would think I would have support from Chris Huelsbeck, Barry Leitch, Martin Edmondson, The Oliver Twins, and
others from the Amiga game, demo and now retro scene. However this hasn’t been an easy project, balancing a family, full time demanding job and this was hard and took two years to eventually complete. Might have been less but persistence from me had to ensure testimonials came in otherwise it would’ve been longer to complete. This documentary shares some of the Amiga scene where it started for Allister also, mix in some montage footage from late 80s to the early 90s and it was a memorable time. Whatever was going on in the world, as kids we had games like Alien Breed, Project X and Superfrog to look forward as well as Dizzy, Dojo Dan and Rock Star Ate My Hamster and Zee Wolf.

Personally to me it didn’t matter so much about the games because I loved the music so him, even when Allister moved on from the Amiga. There was so much I wanted to include in this documentary but timing was such an issue, for example I would’ve loved to included a piece on Lynette Read, voice of index systems in Alien Breed and vocal talent to other games Allister worked on. Unfortunately when completing the album for the backers once funded, Allister’s mum sadly was involved in a road traffic accident and passed away after a time in hospital, it never compromised the album or the work itself but I would’ve loved to have included a piece on Lynette. Although the documentary is based on Allister it is however dedicated to Lynette in her memory.

I think anyone who had an Amiga and never heard much of Allister’s work would still like this as it relives memories of the Amiga adverts and Amiga 30 UK held in Peterborough. It covers Allister’s work but also the tunes he recreated for the album.