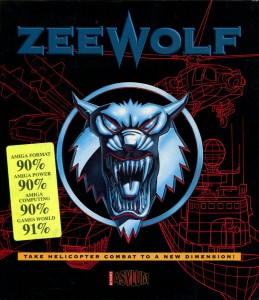 Released in late 1994  is a superb helicopter shoot em up, what really made this game stand out at the time was the fact that it was programmed by former magazine writers who were tired of the Amiga 500 being overlooked in favour of the 16 bit and 32 bit consoles!

Zeewolf has much to enjoy, graphically the game is excellent with vector style graphics very similar to Electronic Arts Desert Strike and Jungle Strike, the sound is also impressive with very beefy explosions and meaty machine gun sound effects.

The gameplay is simple and fun, missions usually consist of “Eliminate all 5 enemy tanks and return to base” giving this game an arcade style quality. You play the part of a mercenary attempting to stop an evil and extremely powerful corporation (Ecliptico) from destroying the planet with something called ‘Fusion Power’.

This game has a password system instead of the usual save game system, this is fine but sadly you have to complete 4 missions to get a password meaning that progress through this game can be very hard. 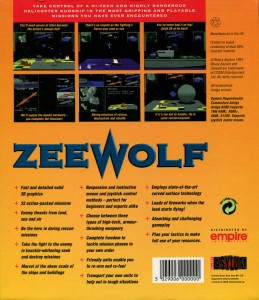 The only other problem I found was that despite being made for the Amiga 500 it really needs an Amiga 1200 to run properly. On the 500 the game plays a little sluggish which really affects the enjoyment.

That aside this game is superb, especially considering it was the developers (Binary Asylum) first ever game.