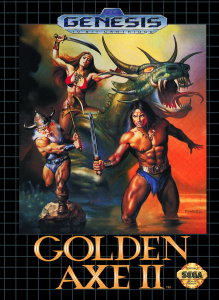 Released in 1991 Golden Axe 2 was the sequel to the amazing Golden Axe and whilst this game does not really add much new to the gameplay it remains a solid effort.

Graphically the game is even better than its predecessor with massive sprites and very detailed and gothic backdrops with loads of enemy sprites on screen at once.

The basic gameplay remains completely unchanged (which is no bad thing), although there is one upgrade involving the use of magic. It is now possible to increase the strength of your magic powers by holding down the button longer or decease the strength by holding it down for a shorter time. This is handy as you can try to save some magic for that end of level boss that you know is coming up! 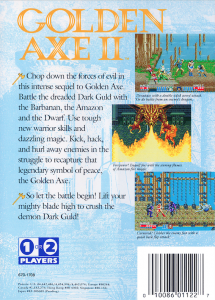 There is more variety in enemy soldiers which makes the game feel less repetitive (some of them look like they were borrowed from the Battletoad’s franchise) and there are more dragons to make use of.

Overall this game is a real classic and I would recommend it to any fans of the genre, it is cheap and easy to find.