Skip to content
You are here
Codemasters Software Company Limited, The
Released
1988
Platforms 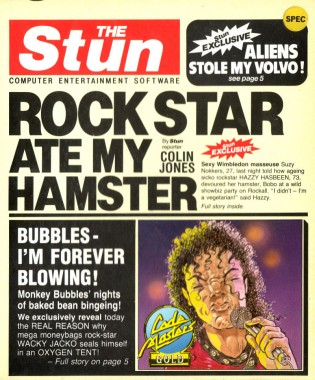 HI THERE POP-PICKERS!
I’m Cecil Pitt: rock entrepreneur, creative genius, friend and confidante to
the stars. No doubt you’ve heard of me. I’ve been a starmaker for some time
now, and I’d like to share my inside knowledge of the ROCK BIZ with you in this
article: THE CECIL PITT GUIDE TO ROCK MANAGEMENT.

PICKING YOUR STARS
How many superstars can you manage? One may be cheaper and easier, but the more
you have, the more popular you’ll be – THINK BIG!
Should you go for the up-to-the-minute groovy pop megastars, or save money on
boring old has-beens? It’s really up to you, and what you can afford. As a
general rule, cheaper stars are less popular, less talented, and most prone to
petty fits of rage and jealousy. This is only a guide though, some of the
nicest, most talented and hard working rock stars I’ve managed have been
willing to work for only a few pounds a week. Remember, there’s one born every
minute.
Get to know the stars, their talents and their moods. That way you can pick the
members that suit your style of management best, and GO FOR IT!

MAKING THE BREAD
OK, you’ve got the stars, you’ve got the management ability, but how are you
going to get that record deal?
Can the band play together? Get them to practise, listen to what they sound
like, do they sound like an outsight happening chart phenomenon to you?
Now it’s time to build up their popularity. Record companies will only be
interested in your band if they’ve got the FANS who are willing to buy their
latest records. Touring and publicity helps, of course, but choose your venues
and ticket prices carefully if this is your band’s first outing then they’re
unlikely to fill a stadium with ticket’s at £20.
Don’t push the band too hard either. Continued touring is great for building up
income and skills, best give them a break now and again. Lavish gifts and
affection on them: show them you CARE. Otherwise you might find them causing
trouble, asking for unnecessary creative control, or worst of all threatening
to leave!

WHICH RECORD DEAL?
If you’re persistent, and can manage your income and star’s successfully. it’s
inevitable that the record companies will start approaching you. THINK
CAREFULLY before you accept any deal though, is a better offer going to come
along soon? On the other hand, don’t be too choosy. Your band might not always
be as popular, and that’s the very time those tempting record offers will dry
up. 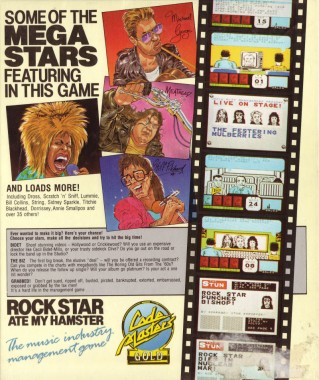 GOING PLATINUM
That’s the name of the game isn’t it? (Actually no, the game’s called ‘Rock
Star’ – ED). So get the best possible recording studio you can afford. And
think carefully about naming the band’s groovy songs.
Now you’ve got a healthy stack of material to release, so plan your releases
carefully. It’s up to you whether you release a single or an album first, or
hit the global marketplace with them both together. One thing’s for sure –
successful singles boost the sales of an LP, so try to get maximum exposure for
your potential toe-tapping chart-toppers. Make a video whenever you can, but
choose your directors, locations, and contents carefully.
Then, who knows? Instant megastardom, or terminal oblivion down the annals of
history? It all depends on YOU; your skills, your decisions, your mistakes.
And there’ll be more to deal with as well: sponsors, music pirates, taxman, the
list goes on. Yes, it’s hard work, and it often means firing your best friends,
or telling them things they don’t want to hear. It’s a dirty job, but
somebody’s got to do it.
The rewards are there for the taking though, collecting those 4 silver discs,
watching your band climb the steep slopes of commercial success, counting the
money as it flows in. And who could be better informed than you right now,
thanks to my immense generosity in sharing my vast knowledge of the ROCK BIZ
with you, in this CECIL PITT GUIDE TO ROCK MANAGEMENT. So, what are you waiting
for? Go grab your slice of glory now – THE CECIL PITT WAY

I owned this game on my ZX Spectrum and have alway been fond of management games.

But this music management game is not a serious game but a very humorous fun game.

You play as Cecil Pitt Music Manager and your aim is to use your eye for talent choosing the right singers to create a number one band of maybe a hit solo singer or even a a duet the choice is yours.

You have an assistant Clive to try to help your on your journey.

Once you have decided on your musicians then its onto what to call them if you choose a band if not the default Solo singer name will be used.

There are many familiar looking stars in this with changed names like Wacky Jacko(Michael Jackson), Sidney Sparkle hmmm(Gary Glitter), on a positive there are some late greats in this game such as Lumme (Lemmy) and Iggy Carrust (David Bowie).

You can keep the names or rename them.

Once you have done this its onto turning them into the hottest property in the music market.

To do this you are required to smartly spend your budget on music practice, keeping singers happy with gifts.  Once you think they are ready you can start to gig and to increase you popularity you will have choices to make like doing benefit concerts choosing sponsorships.

If you are lucky enough to make the right choices it wont be long before your filling various venues and then its onto the studio to record and album and watch that billboard chart.

The Press as in real life will be your friend or foe and if wrong decisions are made headlines can ruin your rep and sales.

I would love to say I have completed this game but I never did I do feel some of it is a bit random and you can even have singer killed if you make wrong choice which is frustrating as thats game over.