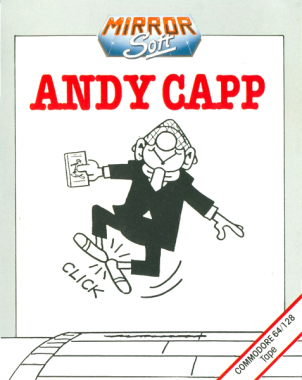 In case you didn’t know, Andy Capp is a notoriously un-PC British cartoon strip. It’s eponymous main character is an unemployed, beer-swilling, wife-beating layabout. He is strangely popular in the United States, even earning a mention in The Simpsons and an appearance in Family Guy.

Andy Capp – The Game is an arcade adventure where the the player spends a week in the life of Andy. He must find his missing benefits cheque, scrape together enough money to pay the rent, and keep himself constantly intoxicated. This requires frequent trips to the pub in between scrounging money from your mates, cheating on your wife, beating up women (I swear I’m not making this up), betting on horses, mugging unwitting passers-by and getting yourself arrested.

It might seem like an odd choice of licence for a computer game, but the strip was very popular at the time and was even made into a short-lived live action TV series. This wasn’t the first game to turn comic strip or TV series into a flick-screen, puzzle-solving adventure game either. Garfield: Big, Fat, Hairy Deal and Grange Hill had a similar feel (the C64 version of the latter being a borderline-unplayable candidate for the title of worst game of all time). Nor was it the only Commodore 64 game to feature domestic violence, drinking and anti-social behaviour; The Young Ones, How to be a Complete Bastard and Viz being noteworthy examples.

While the cheerful box art for the original Mirrorsoft release doesn’t convey any such wrongdoing, the Alternative Software re-release of the game is a little more up-font, picturing Andy, drunk and smoking a cigarette, being questioned by a police officer having just punched (and possibly killed) a man in a bar fight. But I’m making it sound much darker than it was intended; I would rather remember Andy Capp for its originality and offbeat humour rather than descend into cries of “You’d never get away with that now” and such.

The player is free to move Andy around the map by either walking off-screen left or right or turning to face a a doorway or street and pushing up on the joystick. Pressing the fire button activates the menu, where the four icons underneath the play area denote pay (wallet), speak (speech bubble), fight (boxing glove) and action (exclamation mark) from left to right. Using these icons, you can buy objects such as newspapers and beer, talk to other characters, attack someone, examine the area or use objects you’re carrying. If you pass someone in the street, they may not want to stop and talk, so you must blow them a kiss. Yes, the game requires you to blow kisses at the rent man. Well it’s guaranteed to get his attention isn’t it? 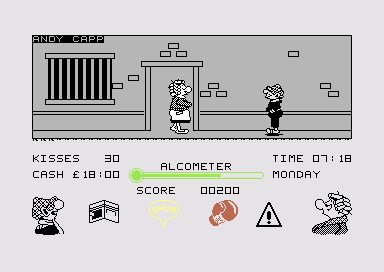 The game is an assortment of money-earning puzzles, for example you need the key to your neighbour’s house to access his garden, to take a rose to give to your mistress, just to butter her up enough to lend you a few quid. You can bet on a horse, but you’ll need to buy the Racing Post for tips first. Many of these tasks can only be completed at certain times and on certain days, so you would need to play the game through a number of times, keeping a note of what to do and when in order to to complete it.

All the while your level of drunkenness is shown by the “alcometer” in the centre of the screen. You need to keep topping this up with beer throughout the game, adding to the overall difficulty since the pubs are only open at certain times of day. The clock is constantly ticking and the time of day is reflected by the brightness of the play area (making use of the C64’s three levels of grey). You occasionally have to skip some time in order to move on to the next task, or at the end of the day go home to sleep or simply get arrested on purpose.

The game used the C64’s higher resolution graphics mode, which limited the available colours to two per eight-by-eight pixel square, effectively mimicking the look of the ZX Spectrum (even the title panel in the top-left corner of the play area is written in the Spectrum’s default character set, for some unknown reason). Since the game is based on a black and white cartoon strip, this worked just fine and still looks pretty good today. The backgrounds are very basic but the sprites are detailed and beautifully drawn. The characters’ walk cycle is also very well animated, with Andy cheerfully bouncing along as you move him. This is significant since the player spends a lot of game time watching this animation.

A harmonic but ultimately grating SID rendition of the second movement from Dvořák’s New World Symphony plays constantly… and I mean CONSTANTLY. While it’s quite nice to listen to for a couple of minutes, this is a long and slow-paced game so you will have to turn it off to preserve your sanity. Had the programmers made the tune play a handful of times throughout the game, such as when the player receives some money, it would have been a nice touch. Although the game is well-programmed, the dialogue is littered with spelling errors, for example “I HAVN’T RECIEVED MY GIRO”.

Mapping the game would be essential if you hoped to play it for any length of time, otherwise you would probably wander the streets looking for the pub only to sober up and “die” every time. Unless you’re using a walk-through (where’s the fun in that?) you’d have to make a note of the opening times for the newsagent, rent office, factory and such if you were to stand any chance of completing all the puzzles before the week (and the game) ends. 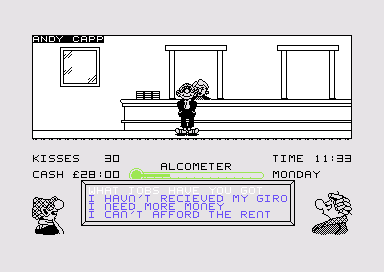 While I wasn’t very familiar with the character as a child, I remember playing the game in a shop and being very enthusiastic about it. When I did buy the game, I played it for hours and eventually completed it but remembering the game recently, I couldn’t recall why I found it playable. Playing it again many years later, I was reminded that there is a little world to explore, different characters to meet and the game has a unique quality to it. I have always loved games that gave you freedom of movement, where you can progress through the game a number of ways. Plus this was a computer game where the main protagonist is an alcoholic and a hooligan, so it felt like a breath of fresh air at the time.

As for the game’s off-colour humour, we didn’t bat an eyelid back then. We didn’t grow up thinking it’s okay to beat your wife, or take Andy’s word for it when he says “THAT WAS GREAT” every time he downs a pint. The fighting elements are comically represented by a dust cloud with the occasional fist poking out. Also, Flo (your wife) gives as good as she gets and often beats you, making off with some of your money. One of the potential game-overs is Andy being sent to prison, so the game can hardly be blamed for sending out the wrong messages.

Why play this game today?

At first glance, Andy Capp – The Game might come across as an unbearably dull experience, one that would probably be best forgotten, but it was ahead of its time. Stopping, talking to or even assaulting people in the street wasn’t the sort of thing we used to do in games; it really was something quite different.

It holds up extremely well visually, thanks to the very detailed sprites and fluid animation. Be sure to turn the music off though. It might not be fun to play initially, but compared to the likes of Grange Hill it’s an enjoyable and funny little game. You might say, it’s as good today as it’s always been.the very detailed sprites and fluid animation