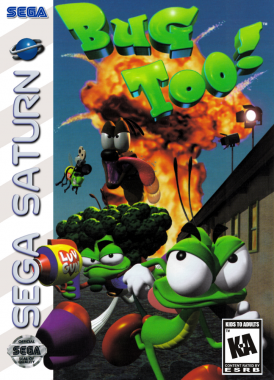 The Original Bug was released alongside the launch of the Sega Saturn console in Europe (July 1995) and was a very well received 2d side scrolling platformer with 3d elements.

As the game sold really well (for a Saturn game at least) it was only a matter of time before a sequel arrived and sure enough Bug Too was released in late 1993.

Bug Too matches the original game for quality and offers the player a little more variety, namely the option to control several other characters in addition to Bug (Maggot Dog and Super Fly). Another major improvement is the variety of levels, whereas the original game had levels which where almost identical Bug Too has many different stages including a Haunted Mansion, an Indiani Jones style jungle and even one set in space! 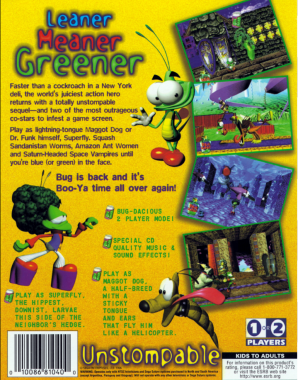 Any downers? Yes one thing is on occasion you clearly jump over a bad guy but you still take a hit! This is really frustrating if you are nearing the end of the level and your health is already low. Another negative is the addition of puzzles, they really slow the action down and I think younger gamers will really struggle with some of them (and me).

Overall I would recommend this game to any fans of the genre although sadly this game is hard to find and often sells for over £30.