As young lads in the late 80s we all loved American wrestling, especially the World Wrestling Federation (WWF) i.e. the one with Hulk Hogan in it. WWF Superstars brought the WWF licence into the arcades in 1989, much to the excitement of fans.

Although there were some fairly good wrestling games on various formats (e.g. Championship Wrestling, Rock’n Wrestle), the only WWF licensed games were MicroLeague Wrestling (an obscure turn-based strategy game for the Commodore 64, Amiga and others) and later Acclaim’s dreadful WWF WrestleMania on the NES. Superstars would be the first WWF coin-op, developed by Technos, the people behind Double Dragon to which it bears many similarities. The game also shares much of its DNA with Technos’ earlier arcade wrestling game Mat Mania (or Exciting Hour as it was known in Japan); in fact its control system and basic move set are almost identical. 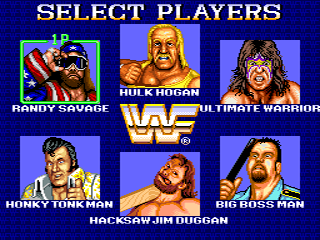 The player chooses a two-man tag team from a roster of six well-known wrestlers: Hulk Hogan, “Macho Man” Randy Savage, The Ultimate Warrior, “Hacksaw” Jim Duggan, The Big Boss Man and the Honky Tonk Man. In one-player mode, you will face random combinations of the remaining four wrestlers in the first arena (Madison Square Garden, New York). Win three matches you’ll get to challenge the non-selectable “boss” characters for the title, namely “The Million Dollar Man” Ted DiBiase and Andre the Giant. They are considerably tougher than the other wrestlers, especially Andre since hardly any of your more powerful moves will work on him. Beat the champions and you’ll be rewarded with a nice animated sequence, then the action moves to the Budokan, Tokyo for you to defend your title. The second arena appears exactly the same as the first, but the difficulty increases and the random opposing tag teams now include DiBiase. If you have a friend and a lot of 20p pieces, there’s a two-player “versus” mode and a also a two-player co-operative mode. 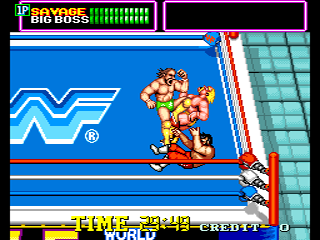 Wrestlers share a set of basic moves such as the back drop, body slam and drop kick, however each wrestler has his own stylised punch, kick and grapple moves. For example, Hogan punches with an open hand while Savage uses a closed fist, Warrior has his gorilla press as his main grapple move while Duggan has his running bulldog and such. Their abilities vary too, for example Honky Tonk’s moves are not as powerful as Boss Man’s, but he has a longer reach. These subtle variations make each wrestler unique and add longevity to the game, something that was sorely missing from many wrestling games before and after.

Players can leave (or fling their hapless opponents out of) the ring at any point, prompting all four men join in the action. The ensuing free-for-all, complete with tables and chairs being broken over each others’ heads, will usually end badly for someone as they smash the buttons trying to get back into the ring before the counter reaches 20. Once your energy is gone, outside the ring is the place to be if you want to stay in the game without adding more credits. Getting Andre counted out was the only way I could ever win the title as a kid, which was a bit out of place since WWF rules at the time didn’t allow a title to change hands following a count-out.

Players can add more coins to regain their energy and reset the timer, or a second player can buy in and take control of the other wrestler. This co-operative mode is arguably the most fun and would become a staple of the 16-bit Acclaim games (WWF Super WrestleMania, Royal Rumble et al) in later years.

There was a real buzz around this coin-op first appeared; our local arcade actually had two cabinets and it wasn’t easy to get a go on either of them. People would place their coins on the edge of the machine as if it were a pool table, something I don’t recall seeing before or again until Street Fighter II arrived a couple of years later. 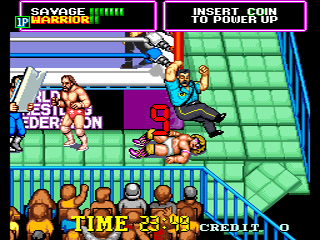 The controls are easy to pick up and respond just as well to frantic button-bashing as to carefully timed combinations. The wrestlers are good likenesses and are very detailed, colourful and well animated. The sprites appear large on-screen, but this is partly due to the game’s relatively low resolution. Some of the wrestlers’ outfits are palette-swapped between rounds to match their real world colours, which is a nice touch. There is background music which also changes between matches, but you might not even notice it over the suitably bone-crunching sound effects. None of the wrestlers’ famous entrance / victory music can be found in this particular game, but we didn’t care about that at the time.

Sadly the game was all but eclipsed by its technically superior sequel WWF WrestleFest, which was built on an entirely new engine. Personally I thought WrestleFest was great but it did seem to pick your moves for you most of the time, while the earlier game gave you much more freedom. WWF Superstars was a great example of what a wrestling game should be: simple to play, colourful, varied and a little bit chaotic. There wasn’t anything quite as good on home consoles throughout the 90s; more’s the pity it was never converted in anything like its original form. I always felt it would have converted well onto the Megadrive; too bad Acclaim held the WWF licence outside of the arcade and were only developing [bad games] for Nintendo systems at the time.

I feel a little sad that only a few people seem to remember this game, considering how popular it was when it was released. I owned the original arcade board myself for a while, but I donated it to the MAME project after some timing issues arose with their driver.