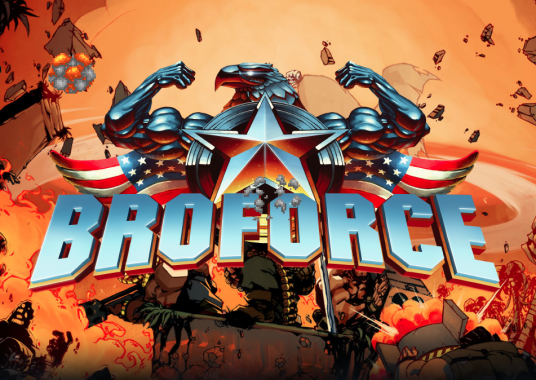 Broforce – A Manly Game for Manly Men, or Women.

Every now and then a game comes out that stands above the rest. Broforce is that game. It’s got a retro feel, it’s exciting, Original and very tongue in cheek, and extremely manly (just like myself).

Broforce is a side-scrolling run-and-gun platform game developed by Free Lives. Development began in April 2012 as a Ludum Dare game jam entry, entitled “Rambros” and it won first prize for being the most fun, development then continued and it eventually got a final release in October 2015.

You play the game as a Bro, based on a large variety of the 80’s and 90’s action movie heroes, like Rambro, Bromando, Brominator etc, you get my drift, each with their own special weapon. 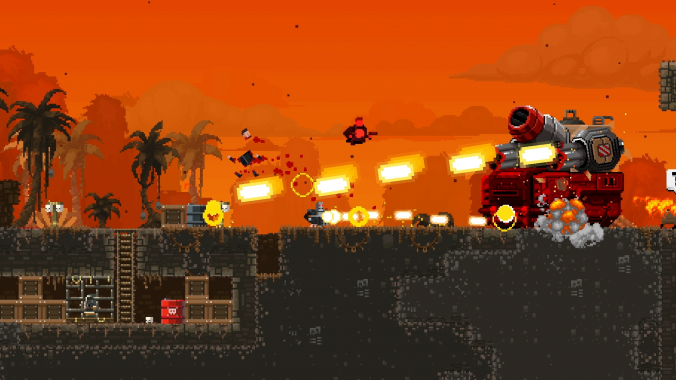 The game initially looks very old school but as you start to play it you soon realise that there is a lot of effects, action taking place. Backgrounds are destroyed by your actions and the scenery reacts to your weapon, eg.. trees shake when explosions go off near them, making it very easy on the eye. Each character resembles the Bro who they intend to be. Rambro looks like Rambo, The Brominator looks like the Terminator, and so on. My favourite character that I’ve played in Brobocop, yep, based on Robocop. There are just so many characters you play as. The Men In Black Character is another good character, as well as the character based on Judge Dredd. 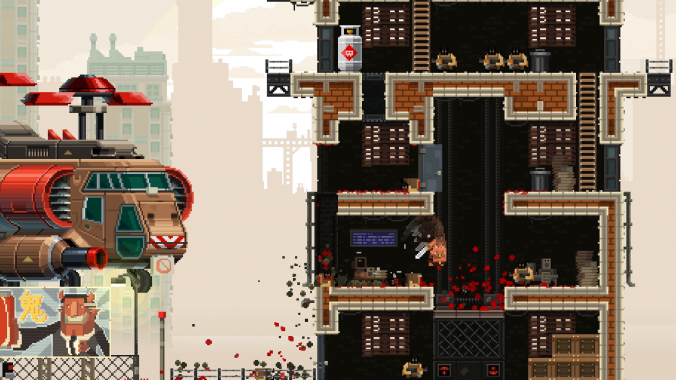 With regards to the gameplay its just amazing, at the start you jump out of a vehicle, and have to kill all the enemies and rescue your fellow Bro’s until you reach the end of the level where an Helicopter flies in and as you jump on the ladder the scenery then erupts in explosions, it can’t be knocked at all. Its quite visually stunning for a pixel game. The collision effects are just absolutly perfect, and so far I’ve experienced no issues apart from it being as hard as hell in spots.

The music and sound effects fit the game perfectly, with an old school rock theme and screaming electric guitars. The sound fx’s are loud, bold and brash and again, just perfect. The characters screaming reminds me of lemmings, as you blast the living hell out of them.

I recommend playing the game with a joypad, otherwise it will be as hard as Satan, and yes you get the chance to fight Satan. I haven’t got that far in the game myself, I believe he’s the very last Boss to fight, so I may never get the chance. I watched a youtube video of it, very impressed. 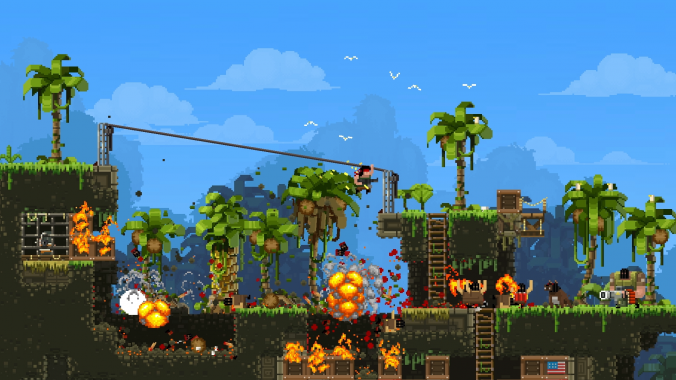 As a developer myself it takes a game with that little bit of something extra special to really impress, and impress it does. I wish I had made it, this game requires a player with a large set of balls to get through it, without being sexist. These old school retro games especially the shoot em ups are my favourite, so I might be a little biased.

This is one of the best, if not the best Old School Retro Indie Games I have ever played!!. Quite a bold statement, but I wouldn’t be the only person to say that.

The only thing that may let the game down is the loading times, but there is so much to load in, and the end result just blows your socks off (literally). All in all this game is worth every penny and to any old school retro fan out there, buy it now. You will not regret it. This game is Fun, with a Big Old Capital F!!

And as a last thought, “I’ll be Back” next week with another Indie Game Review.. Yippe Kay Hey Mother F***r.. (whoops.. getting carried away.. maybe getting a bit too manly..)