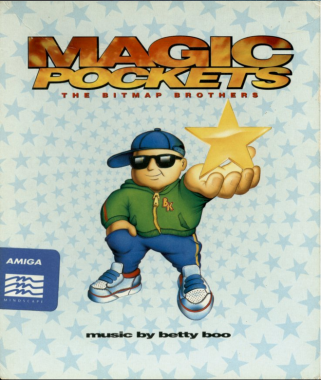 Released in late 1991 for a variety of machines including the Amiga 500 Magic Pockets was a really fun 2d Platform game developed by the Bitmap Brothers.

You control a young man named “The Bitmap Kid” who owns a magic pair of trousers with an unlimited amount of space in the pockets. In these pockets “the Bitmap Kid” keeps all his toys and some assorted creatures, sadly one day these creatures decide to run away taking all of the toys with them and it is down to you to get them back.
The game is split up into 4 basic levels (Jungle, Caves, Mountain and Rivers) although each level has several different  stages. “The Bitmap Kid” has several skills to aid the players progress including walking, running and picking up various items and throwing them at baddies. In addition to these skills the player can also call upon a special weapon which changes depending upon what level you are on (such as sucking in the baddies on screen and turning them into power ups). 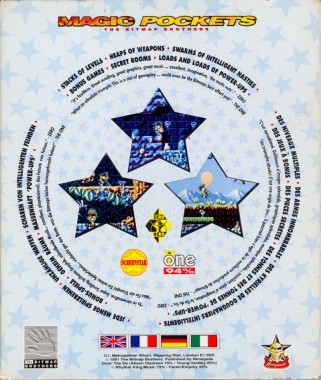 Any downers? well for one thing the levels are far too long and as a result it is easy to run out of time and if that happens a balloon appears and eventually kills “The Bitmap Kid’ which can lead to very frustrating moments.
Despite this I would still recommend this game to any fans of the genre although it can very very difficult to track down a copy today.
One piece of trivia there was a sequel planned for the Gameboy Advance in 2002/03 but despite being nearly complete the game was eventually canned.