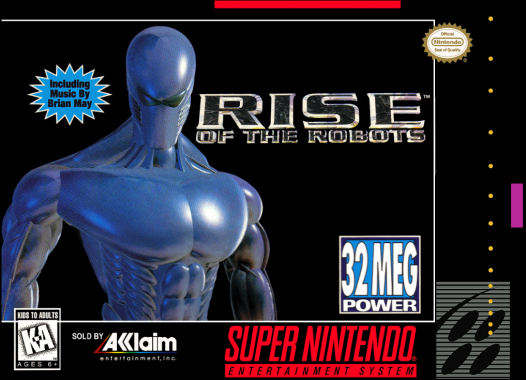 Released in late 1994 for the Super Nintendo and a variety of other formats Rise of the Robots was a one on one beat em up that combined fantastic visuals with truly abysmal gameplay and controls.

The graphics are amazing mixing pre rendered 3D sprites with a cyberpunk style artwork, all of the fighters look and animate very well and the backgrounds are incredibly well detailed for the time.

Sadly everything else about this game is bad, real bad. The controls are really slow and unresponsive and despite my best efforts I could never pull off any attacks other than very basic kicks and weak punches, I could never get my character to turn round either so was unable to defend myself if my enemy leapt over my head!

The sound effects and music scores are truly dreadful, especially the sound effects which are a good 10 seconds behind what is happening on screen (on one occasion my character died and he was still making punching sounds whilst the game was loading my next fight). 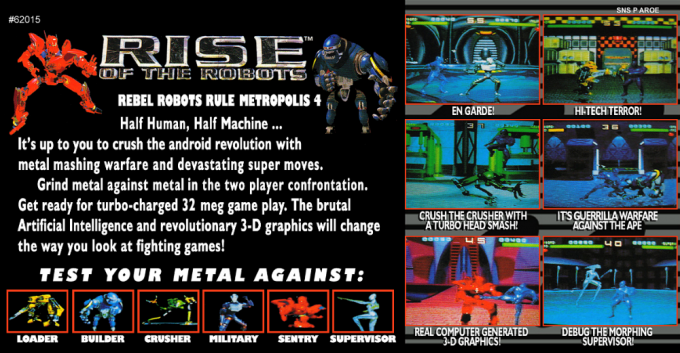 Another problem is despite the game advertising 7 ‘unique’ fighters you can only control 1 of them in the single player campaign (a very bland Cyborg). Finally just to top things off the evil villain of the game is called ‘The Supervisor’, that is name to strike terror into players (irony).

All in all this is one of the worst games I have played and you simply must do all you can to avoid it, incredibly despite selling very poorly it received a sequel on the original Playstation and Sega Saturn called Rise 2: Resurrection (although luckily for me I have never played it).