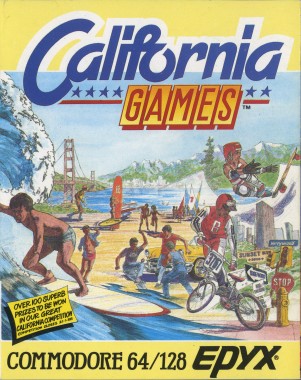 Epyx took us to the Golden State for this instalment of the Games series, keeping the same blend of stunning visuals, immersive atmosphere and slick feedback we had come to expect as well as the slight wackiness of the events found in World Games. If you’re not familiar with the series, there are six very different sporting events and each is represented by a very high-quality mini game. You can practice one event at a time if you wish, then compete in any or all of them to see what sort of a score you can rack up. There is of course a turn-based multiplayer mode, where everyone picks a random country and inputs their name as something politically incorrect. The earlier Summer Games II and Winter Games are generally regarded as two of the absolute best software titles on the C64.

UK gamers may remember those VHS preview tapes that looped endlessly in Boots and WH Smith. I was always sucked in by them, but I never bought a game on the strength of its preview video alone. Except one time, when one game looked so awesome I just took it straight off the shelf and bought it. It was California Games from the Commodore 64 and to paraphrase the text on the cassette inlay, the summer of 1987 really did last forever.

Rather than choosing a country to represent, you have to pick a corporate sponsor you may or may not have heard of. An interesting point is that these differ between the cassette and disk versions of the game. Ocean Pacific is a real brand apparently, as of course are Casio and Kawasaki. I’m not so sure about the others; anyone ever owned a Spin Jammer? No? Never mind, on with the events! 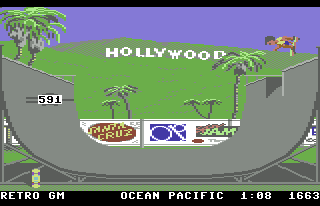 Half-pipe skateboarding: You have to pull down on the joystick as you slide down the ramp and push up as you climb the opposite side, then tap either left or right to turn depending on which way you were facing. Before long your guy goes off the top of the screen and you have to judge when to turn, racking up more and more points the higher you go. Round it off with a hand plant (hold down fire at the top of the ramp) to slow the pace when it gets too much. Mistime a turn or hold fire for too long and your guy is down, while his board continues on its merry way before lodging itself firmly in his underpants.

Foot bag: A really unique event this. No arena, no crowd, just one guy playing keepy-uppy in the park with a bean bag. You use the fire button to kick, knee or head the bag depending on where your guy is positioned and when you hit the fire button to catch it. The longer the rally and the more adventurous the tricks, the more points you get. It may not sound ever so exciting, but this is an intricate event and quite satisfying when you keep a rally going. The controls are consistent and responsive enough to make it fun. Plus you can hit the seagulls for extra points and if you get really bored, forget about the hacky sack altogether and do some Morris dancing until the time runs out. 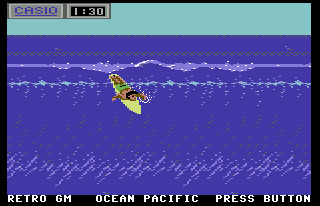 Surfing: I won’t pretend to understand surfing jargon. You just have to stay on your board, get as much air as you can when you fly off the top of the wave (make sure you land at the adjacent angle you launched at) and ride inside the tube for as long as you dare. Only limited manoeuvres are available but it’s fun playing chicken with the edge of the breaking wave. Enjoy the legally-distinct version of Wipeout playing in the background and watch out for the comedy animations at the end of your turn. I was never sure which tricks get you the most points, but I found an anticlockwise rotation from the top of the wave would pay off. After a minute and a half the wave will crash and you’ll be in the water anyway, unless you jump off the top and drop behind the wave at the last minute. Cowabunga (or something)!

Roller Skating: You build up speed by alternating diagonals on the joystick (top-right to bottom-right to top-right and so on) in a rhythmic fashion, which is genius since this outward pushing motion is how you roller skate in the real world. The jump physics are also novel; press the fire button down and your skater bends her knees, then you release it and she jumps. An odd control mechanism but it really works. It may not be as enjoyable as the other events (unless you always wanted to play some sort of avoid-the-cracks-in-the-pavement simulator), but it’s fast-paced and challenging. Did I mention that the main protagonist is a girl? She’s also ginger. Nice to see there was some diversity in video games in the 1980s! 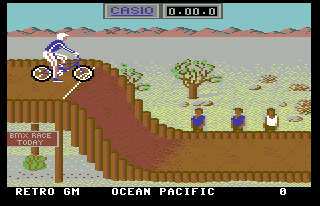 BMX: This is the ultimate. I probably would have paid full price for this as a stand-alone game. Tap right on the joystick to speed up, tap left to lean back on the bike and hit fire to bunny hop. Hit fire at the top of a ramp to get airborne and here’s where you get to show off your moves. You can kick the bike out sideways, spin 360 degrees, pull a backward somersault or (of you’re brave) the fabled forward somersault. There are only a few places on the course where it is possible to pull off one of these and it is immensely satisfying when you finally land one. You get three lives, but if you badly mistime a somersault and lend on your head it’s instant game over (presumably because your guy needs to go to the hospital). The physics are spot on; the momentum of the bike as you go up and down the ramps and just feels right. Think of Excitebike on the NES and then multiply the graphics and playability by a million. The bike itself is the only sprite on the screen; the programmers took advantage of this and made it huge. It is also beautifully animated as it travels and rotates during a trick.

Flying Disc: A bit of an anticlimax after the stonkingly good BMX event, but it is interesting in that you control both the thrower and the catcher. You line up your throw not unlike a typical golf game, then control switches to the catcher for you to get yourself underneath the disc at the right moment. You can either extend an arm or perform a dive, either with the direction of travel or (for extra points) against. A short event with not much variation, but a fun way to round off the tournament. If you’re behind on points going into this with nothing to lose, why not go for a forward dive? If you catch it, the gold trophy could be as good as yours. 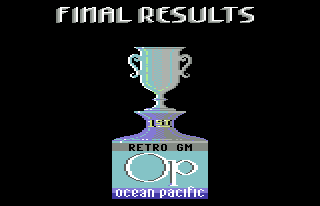 The C64 version of California Games was nothing short of a materpiece. The events are all instantly playable with great graphics and responsive controls. The sprites are large and colourful, the backgrounds are beautifully drawn and while the music and sound effects are a little basic, they fit the game perfectly. As with all of the Games series, there’s a lot of fun to be had in one-player mode but get a few of your mates round and things get competitive. If you think a round of pass-the-joystick in front of an 8-bit machine sounds dull, you’d be wrong. This was how we spent our afternoons as kids and we loved every minute of it.

California Games was ported to almost every computer and console under the sun. The Commodore 64 version is (in my opinion) definitive; it just feels bigger, more polished and none of the 16-bit versions measure up. Epyx really knew how to push the hardware to its limits; look at the multi-layer scrolling in the roller skating and flying disk events for example. If you need a reminder that the C64 was not just a great home computer but also an outstanding games machine, I would urge you to load this up and see for yourself.