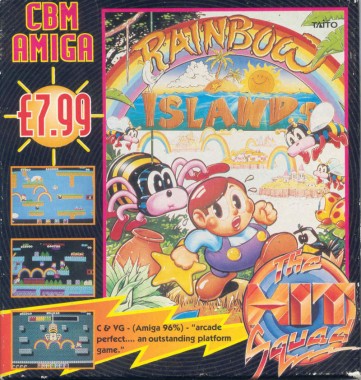 Rainbow Islands was released in arcades way back in 1987, a sequel to the very successful Bubble Bobble this game is essentially a fast paced 2d platformer where the player has to outrun the rising tide and reach the top of the island using rainbows as makeshift platforms.

The game was hugely well received and so it was only a matter of time before it was released on home platforms including the ZX Spectrum, Amstrad CPC, Commodore 64 and this version on the Amiga 500.
The Amiga 500 version was the best version available at the time, it had graphics very comparable to the arcade original, superb sound, simple and responsive controls and all 10 levels were included.
Sadly though for whatever reason this version seems to be much harder than the arcade original and can be very frustrating as a result, one of the reasons for the insane difficulty is due to the nearly impossible task of getting the diamond’s which are required to get the nice ending, even if you manage this you need to get them in the correct order! 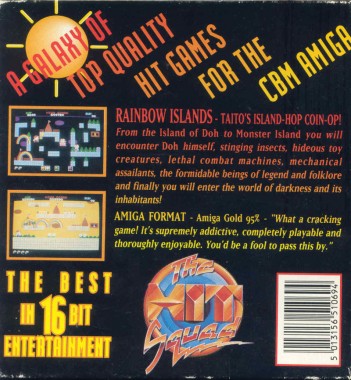 Overall I would recommend this game to all fans of 2d platform games (especially if you like a real challenge), this Amiga version is very hard to pick up these days but the game is also available on mobile platforms.