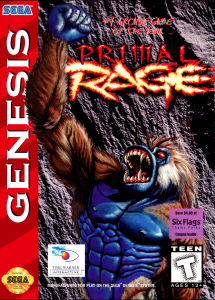 Released in the Arcades in 1994 Primal Rage is an above average one on one beat em up in the style of Mortal Kombat with the added bonus of using Dinosaurs!
The game has 7 Dinosaurs/Beasts to use including 2 Ape like creatures, 2 Tyrannosaurus Rex like creatures and a Velociraptor. All of them play similar and mainly use the same moveset’s but it was a novel idea for the time period. Unlike rival games such as the Street Fighter series this game does not really have much in the way of ‘Combo’ moves and mainly relies on strikes and basic wrestling type moves.
The game was sadly overlooked in Arcades’ at the time of it’s release due to the fact it was still in 2d whilst most of the other fighting games of the time were moving into the realms of 3d (such as Virtua Fighter and Tekken). With this in mind it was something of a surprise when the game was ported to many home computers and consoles including this version for the Sega Megadrive. 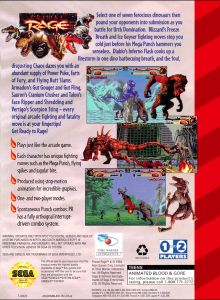 Whilst the graphics were downgraded considerably (smaller sprites and much less detailed backgrounds) the overall conversion was surprisingly faithful bringing home all the playability and atmosphere of the Arcade experience. The only major downer for the Megadrive version is the appalling sound effects and music, some of the tunes sound like they were done on an Atari 2600!
Overall I would recommend this game to any fighting game fan’s out there, one piece of trivia Atari Games started a sequel but it was never actually released due to Atari’s bankruptcy and a general decline in the popularity of Arcades.