The Legend of Zelda:Link’s Awakening 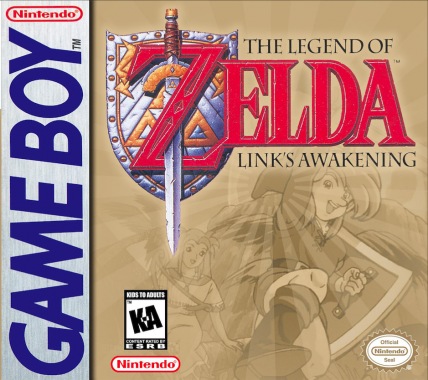 The fourth installment of the Legend of Zelda series; This is the first game in the franchise that took place outside of the sacred land of Hyrule; yet in a realistic dream… Or was it? Like it’s predecessor, Like the Legend of Zelda: a Link to the Past, for the SNES, this title was the only title of the franchise for the GameBoy brick. What makes this game so special?

Princess Zelda is not in this game at all, however she is referenced only in the beginning. The main protagonists besides our hero in green, is a girl named Marin and her father Tarin. The setting of this game is set on Koholint Island. And the deity is called the Wind Fish. 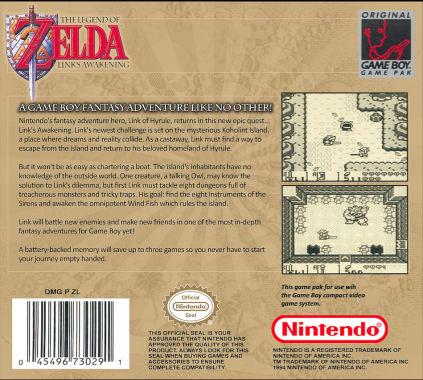 About 1/4 into game you get (depending on whether or not you count it as a mistranslation) an ocarina (first or second time in the series; depending how you look at it) to play songs with (and required item to beat the game): the Ballad of the Wind Fish to complete the game (among others), Manbo’s Mambo used to warp to beginning of dungeons or to Manbo’s pond in the north central part of the island, and lastly the frogs Song of Soul to resurrect animals. So what else?

There are several references to Nintendo’s other franchises: a Yoshi doll in a trading sequence, Mr. Write from SimCity, a Kirby-like enemy, Richard from “Who the bell tolls”, Tarin and the Hen House man look like Mario and Luigi respectively: Even Mamu/Wart makes a cameo!

Five years later this game was released as the DX version for the Game Boy Color: this game has a color dungeon that can only be accessed when playing on a Game Boy color or later piece of hardware GBA, Game Boy Player)! You can slip it into a Super Game Boy for a special background screen of Koholint Island…

This game doesn’t disappoint… So go play it today