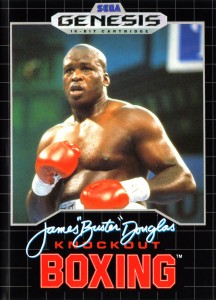 James ‘Buster’ Douglas Knockout Boxing was released for the Sega Megadrive in 1990, known as Final Blow on other formats the name was changed to capitalise on the popularity of Douglas who had just defeated ‘Iron’ Mike Tyson to become the Undisputed Heavyweight Champion of The World. Sadly this moved backfired as Douglas lost his Title to Evander Holyfield just prior to the game’s official release!

The gameplay is your standard boxing game played from a 2d angle (this was different to many other boxing games of the day that were using basic 3d viewpoints). The player can win matches by either going for a knockout blow when the opponent is sufficiently worn down or more likely go to the judges scorecard and hope you landed more shots than your opponent. 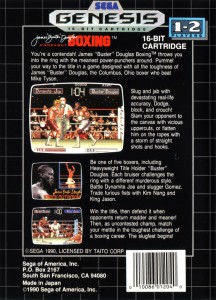 There are a nice selection of fictional fighters to choose from including Dynamite Joe, The Detroit Kid and James ‘Buster’ Douglas himself.Despite being a fan of Boxing and Boxing video games I had a hard time playing this game and as a result I cannot recommend it to anyone, if you are looking for a good old school boxing game you will be better served picking up Super Punch Out on the Super Nes.One bit of trivia this game was used by Sega in their infamous advertising campaign in the United States – GENESIS DOES WHAT NINTENDONT!