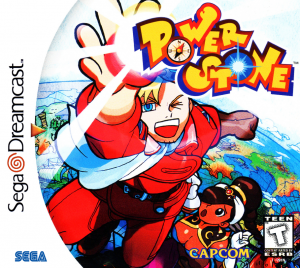 Released in late 1999 for the Sega Dreamcast Powerstone is a superb 3d arena based one on one beat em up, an extremely original game for the time.

The gameplay is really fun and very different to other one on one beat em ups of the time (such as Virtua Fighter 3 and Soul Calibur) in that here you can pick up items in the 3d arena and use them against your opponent. These items include weapons such as a pistol, a machine gun and a huge sword. During the battle the Powerstone’s appear around the arena, if you can collect 3 different Powerstone’s your character will transform into a much more powerful fighter with extremely powerful attacks.

It is also possible to pick up background objects (such as support beams for buildings) and use them against your opponent, this makes the game really stand out from the crowd! The graphics are among the very best available on the console as is the music and sound effects. 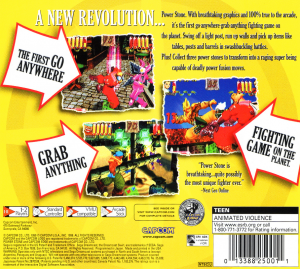 There are 10 characters to choose from all of which are based upon 19th century legends and myths (such as Jack the Ripper), there are also a large variety of 3d arenas to fight in.This game is so unique and is well worth picking up if you own a Dreamcast, even if you are not a fan of beat em ups this game will still charm you.