Skip to content
You are here
Published by
Square Soft, Inc.
Developed by
Square Co., Ltd.
Released
Aug 11, 1995
Also For 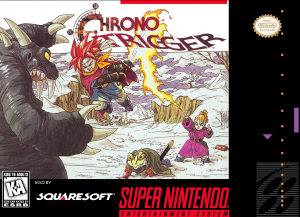 Sit back and relax, because we’re going for a ride through time. Chrono Trigger for the SNES is hailed as one of the greatest RPG’s of all time. I would do anything to go back to 1995 and play this for the first time all over again. Of course it would take me days to write out the entire story of Chrono Trigger. Besides, Squaresoft already did it beautifully, so I will just touch on a few points as to why this game is great and holds up to this day.
We begin in the kingdom of Guardia in the year 1000 A.D. and our protagonist, Crono is going about his everyday life in his quiet village. He meets a vibrant young lady named Marle while at the Millenial Fair.. Crono and Marle meet up with Lucca, an intelligent girl with a knack for inventions and Crono’s childhood friend. Her newest invention is a transporter machine that goes haywire when Marle gives it a try. The machine reacts to Marle’s pendant and sends her through time. Everything goes nuts from here.
Crono and company meet up with an unlikely group of companions including a knight named Frog, Ayla the prehistoric woman, a wizard Magus  and a robot called Robo. Each companion mentioned comes from a different point in timeand has a rich backstory. Crono travels to a post apocalyptic future to learn that a creature by the name is Lavos is responsible for destroying civilization in 1999 (and here we were all afraid of Y2K).. It is decided that to preserve the future (and the past) Lavos must be defeated. 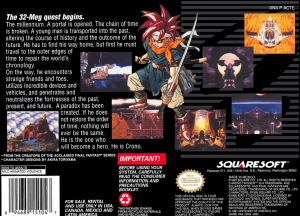 Battle is fun! In Chrono Trigger your characters can either do solo attacks, or combine with other characters to perform Techs. For every combination of two or more characters, there is a unique tech that either involves weapon combos, or magic or both. Battles are not random encounter as in Final Fantasy, but appear on the map as you trek along. Each character is also predisposed to learning a certain type of magic such as Lightning, Shadow, Water and Fire.
I do not wish to give away spoilers on the chance that a reader has not played Chrono Trigger. If you haven’t played this great RPG, please do, you will NOT be disappointed. The soundtrack was composed by Yasunori Mitsuda and Nobuo Uematsu (of Final Fantasy). Each time period is so uniquely different with it’s own feel and atmosphere. If you want a game to make you feel every emotion known to mankind, this is the one.