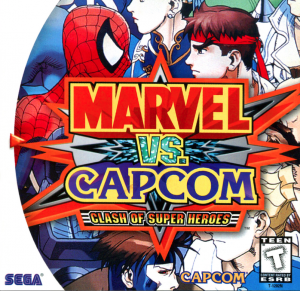 Marvel Vs Capcom was released on the Dreamcast in late 1999, the game follows on from Capcom’s superb range of 2d beat em ups on the Saturn (including X Men:Children of The Atom and Marvel Super Heroes).

There is much to enjoy in this game, firstly the roster of available fighters is superb including the best of Marvel such as Spiderman, The Hulk, Wolverine and Captain America and the very best of Capcom including Ryu, Zangief and Mega Man.

Then there is the awesome graphics, incredible 2d layered backgrounds and huge detailed sprites, the game has a very Anime style to it which is timeless (unlike some 3d fighters of the time which now look terrible).

The gameplay itself is also brilliant fun similar to the Saturn games but the key upgrade here is that each fight is 2 vs 2 where you pick 2 fighters and can tag them in or out during the fight depending on how the fight is going (it is really fun matching someone like Zangief from Street Fighter with someone like Wolverine from the X Men to see which combination works best as a team). 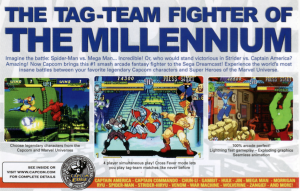 Bad points? Not much except maybe sometimes the action is a little too chaotic (especially in 4 player mode) but that aside this game is near perfect and if you are a fan of 2d beat em ups you simply must try this.