X Men: Children of The Atom was a 2d beat em up released for the Sega 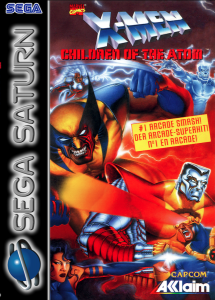 Saturn in 1996, converted by Capcom from their arcade hit of the same name.

The graphics are superb with colourful and well animated sprites and the backdrops are brilliant including one which takes place on the deck of an aircraft carrier! The sound is superb as always with Capcom fighters and the sound effects are also excellent with some very cool digitised speech.

All of the X Men are available here including Wolverine, Iceman, Cyclops and Storm as well as several bad guys including Omega Red, Magneto and Juggernaut. Compared to other 2d fighters the special moves here are easier to pull off making this game ideal for novice players (like me). 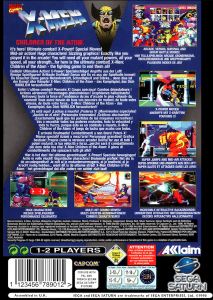 Any Downers? Well compared to later games in the series like the Marvel VS Capcom games the action here can be a little sedate and slow but despite this I still recommend this title to any fans of the genre as it is nice to see where this type of beat em up began.