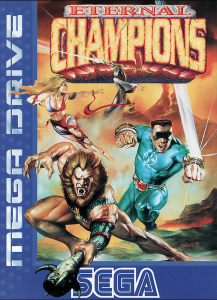 During the early nineties the one on one beat em up genre was very popular mainly due to the success of Street Fighter 2 and Mortal Kombat.

There were many clones released during this including this one Eternal Champions from Sega. Considering Sega’s fantastic pedigree in the video game industry I was expecting great
things but to be honest this game is a mixed bag.

Firstly the good points, the graphics are very good with colourful and sometimes gothic style backdrops and big well animated sprites. The fighter’s themselves are very diverse including a caveman, a 1920’s gangster, a vampire, a worklock and a bounty hunter. The music is also very impressive with Mortal Kombat style tunes really setting the tone.

Whilst very hard to actually pull off the fatalities are very impressive and extremely gory, they include getting a random sea monster to bite off the head of an opponent and another where your rival is burned at the stake! 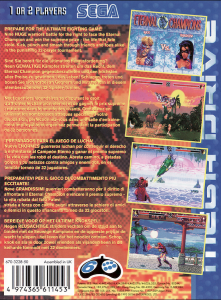 Sadly that is where the good points end, the gameplay whilst decent is simply too hard. There is no way to change the difficulty level and I
confess to having never completed the arcade mode as a result. The cpu player blocks almost all my attempted attacks, when I do eventually pull off a special move it hardly does any damage anyway!

Due to these flaws I can only recommend this title to hardcore beat em up fans to pick up and even then please don’t pay more than a few pounds for it.