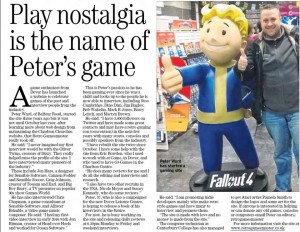 A game enthusiast from Dover has launched a website to celebrate games of the past and interview people from the industry.
Peter Ward, of Balfour Road, started the site three years ago but it was not until October last year, after learning more about web design from maintaining the Charlton Churches website, that Retro Gamesmaster really took off.
He said: “I never imagined my first interview would be with the Oliver Twins, creators of Dizzy. They really helped raise the profile of the site. I have interviewed many pioneers of the industry.”
These include Jon Hare, a designer for Sensible Software, Cannon Fodder and Sensible Soccer, Greg Johnson, creator of Toejam and Earl, and Big Boy Barry, a TV presenter on popular 90s show Games World.
He has also interviewed Chris Chapman, a game consultant at Sensible Software, and Allister Brimble, a video game music composer. He said: “I had my first video interview in early 2016 with Jon Ritman, creator of Head over Heels and worked for Ocean Software.”
This is Peter’s passion as he has been gaming ever since he was a child and looks up to the people he is now able to interview, including Stoo Cambridge, Dino Dini, Jim Bagley, Bob Wakelin, Mark R Jones, Barry Leitch, and Martyn Brown.
He said: “I have 3,600 followers on Twitter and have made some great contacts and may have a retro gaming con (convention) in the next few years with many stores, consoles and possibly speakers from the industry.
“I have rebuilt the site twice since October. I have some help with the site from Eric Bowden, who I used to work with at Game, in Dover, and who used to have G8 Games in the Charlton Centre.
“He does many reviews for me and I do all the editing and interviews and research.
“I also have two other recruits in the USA, Nicole Moyer and Stacey Kennedy, who do some reviews.”
Peter, 37, who is also a campaigner for the new Dover Leisure Centre, is hoping to release a book of his interviews in the future.
For now, he is busy working on the site and releasing daily reviews at 6.30pm Monday to Friday and weekend interviews.
He said: “I am promoting indie developers mainly who make retro style games and have many to interview and promote them.
“The site is made with love and no money is made from the site.”
The computer technician at Canterbury College has also managed to get Atari artist Pamela Smith to design the logos and some art for the site. If anyone is interested in helping or can donate any old games, consoles or computers email Peter on editor@retrogamesmaster.co.uk

For more information visit the site at www.retrogamesmaster.co.uk