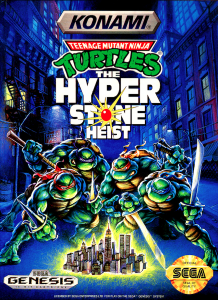 Released in 1993 and based on the very popular television show Teenage Mutant Ninja Turtles: The Hyperstone Heist is a superb scrolling beat em up for the Sega Megadrive.

This game has much to enjoy including great visuals with massive sprites and hugely detailed backgrounds, the sound is also superb with excellent sound effects (from the 4 Turtles especially). The gameplay itself is very simple and really fun (similar to the Streets of Rage series), the action is fast and frantic with a variety of bad guys including foot clan soldiers, mini robots and a host of very inventive end of level boss’s. 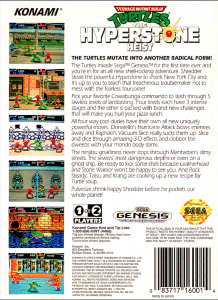 Sadly comparisons with the Super Nintendo version (Turtles in Time) are inevitable and this game cannot compete. The Super Nintendo version has fantastic scaling effects using Mode 7 which the Megadrive simply cannot match. Also the Megadrive version has several attack moves missing from each Turtle and several key frames of animations are also absent due to the limitations of the hardware.

Comparisons aside this is still an excellent game and well worth picking up of you are a fan of the genre although sadly the game is rare and expensive often selling for over £50 on Ebay.