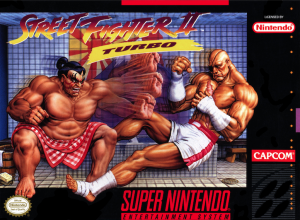 Released in 1993 Street Fighter 2 Turbo was the sequel to the critically acclaimed Street Fighter 2 The World Warriors, this game builds on the amazing work of the earlier game and makes several tweaks to the gameplay and presentation.

Firstly the graphics are even better than the original game, each fighter has extra animations and better yet the backgrounds have been reworked massively. Each background has much more detail and much more going on, especially on Guile’s stage.

The sound has been improved further with a little more digitised speech added, best of all though is the ability to play as the 4 boss characters from the previous game (Balrog, Vega, Sagat and M.Bison), this adds massive longevity to the gameplay (particularly in multiplayer mode).

Lastly the gameplay benefits from extra speed options, hence the “Turbo” subtitle. It is now possible to play through the arcade mode and the 2 player mode with up to 5x the speed of the original game. This makes the gameplay even more frantic and fun than before. 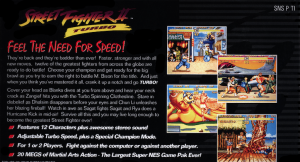 Any downers? Not really except when compared to the Sega Megadrive version Street Fighter 2 Special Champion Edition (name change due to licensing issues) it has a few features missing such as the training mode and the group battle mode.

That aside though is game is top quality and I would recommend it to any Super Nintendo owners, it is easy to find and is usually available for around a fiver!