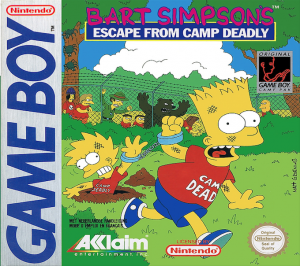 Depending who you talk to, or if you are a hardcore Simpson’s fan, or just know Simpson cannon in general; the episode “Kamp Krusty” was NOT the inspiration for this game or vice versa (this game was released a whole ten months before that episode was broadcasted for the first time) this game came first…

This game back in 1991 got mixed reviews… No battery backup for starters (the game is about a half hour long if you know what you are doing), a non cannon relative of Montgomery Burns (spitting image) is your antagonist and you need to escape his campground Camp Deadly. Homer and Marge ship Bart and Lisa to Camp Deadly for the summer and from what was pitched to the kids, it is a total nightmare. You play as Bart Simpson as you battle counselors, killer bees, bullies, and all other sorts of baddies, endure food fights for your life (and Lisa’s). 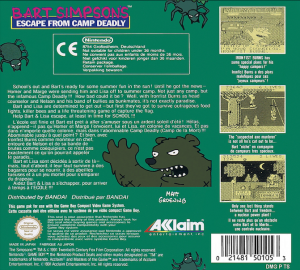 Your default weapon is spit wads which do absolutely nothing to crush your enemy. You do obtain boomerangs to defeat counselors. Once you defeat a black counselor (dark green/black sprites), you get a doughnut, which when collected, count as HP in the game, once you have no more, you will die. You do hear Bart and Lisa say a few lines lit dialogue like “stop it Bart” and “eat my shorts” when Bart gets hits hit by an enemy and “aye carumba” when he dies”… Something very unique for an early Game Boy game.

All I can say in conclusion is that this game is unique for 1991 and when tv/movie games were actually semi-cool to play. Try it for a nice trip down memory lane… And classic Simpson’s too!