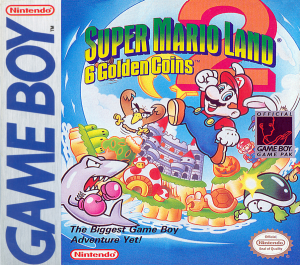 Remember when I said that 1992 was a good year for Nintendo overall when it came to either good games or the start of some good franchises? Well, here’s yet another game for that year

The sequel to Super Mario Land 1, Mario returns from Sarasaland to find that Wario, (Mario’s childhood friend from when they would play cowboys and Indians) has taken over Mario’s castle while Mario was trying to stop Tatanga from marrying Princess Daisy and save her kingdoms, respectively. So Tatanga was working for Wario all along as a ploy for Wario taking over Mario Land. In order to get his castle back, Mario has to conquer six zones and earn their golden coins to battle Wario for what is rightfully Mario’s in the first place.

[From Left to right on the Mario Land map: after the intro level…. THIS CAN BE PLAYED IN ANY ORDER THE PLAYER CHOOSES!]

You must go through Tree Zone to to the top to battle with a Dondon bird. Next you must climb a mountain to a bubble blowing Hippo (Hippo Zone level) in order to reach the Space Zone in what will be a simpler round 2 with Tatanga. World three will be through the Macro Zone where Ricky the Mouse will be guarding that golden coin. World 4 will be through the Pumpkin Zone where Samasa will be waiting to cast some spells on Mario. Next comes the Mario Zone in world 5 where you work your way through the a mechanical Mario to face the Three Little Pigheads. The sixth and last golden coin is guarded by Pako the Octopus inside a whale themed level. Once all six coins are obtained you will now have the chance to battle Wario yourself in an extra tough lava pit filled castle to battle Wario for your castle.

This game has a Super Mario World flare to it as it was released around when the SNES was making its way to our homes (and a lot of us got SMW as a pack-in for that console). 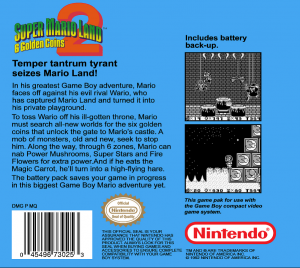 This game has 32 levels of Mario fun. I remember being nine or ten years old when this game and I have extremely fond memories playing it. In fact I have this game on emulator and still after almost 25 years later, I still smile. This game has a easy (pushing select on your file screen, you will see Mario go from Super Mario size to small Mario)… I would suggest that if you are having a hard time getting to Wario in the palace stage is the only time you use it…

At four megabits, this game was one of the biggest games of its hardware, as of today that is consider a sneeze.

So for those who would absolutely love a challenge (this game was no laughing matter back in the day as it is now). So Mario fans unite and go try it today!