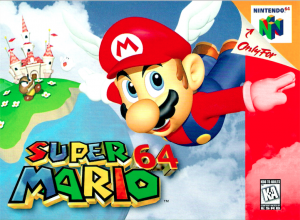 When I first saw footage of Super Mario 64 on an episode of Gamesmaster in 1996 I assumed it was either a cut scene from a game or perhaps a cartoon, needless to say I along with everyone else was astonished when it turned out that this was actual gameplay footage from the N64 launch game!

Whilst many other game characters (looking at you Sonic) struggled when being converted into a 3d world Mario actually managed to improve with extra moves and new skills (such as somersaulting).

Super Mario 64 plays similar to its 2d forebearers such as Super Mario World with classic platform action but with an added emphasis on exploration and puzzle solving (adding greatly to the game’s lasting appeal). The controls are fantastic using the brand new N64 pad with a wonderful analogue stick right in the middle helping to give Mario very precise controls.

Any downers? Not much, except like all 3d platform games of the mid to late 90s the camera is your worst enemy! Time and time again whilst you are preparing for a massive leap or jump the camera turns around and faces Mario so you cannot see where you are facing. The only way round this is to continually walk away and back again in the hope that the camera will move with you. 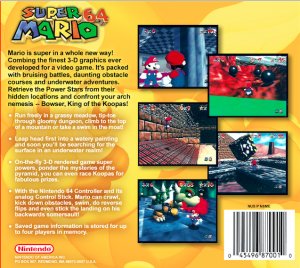 That aside this game is near perfect and is a no brainers for any N64 owner, it is cheap and easy to find and is also available on the Virtual Console on Wii and Wii U for under a tenner!