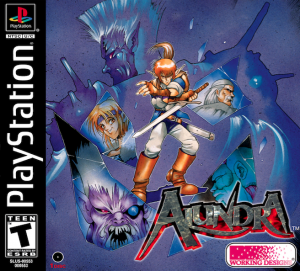 If you’re an RPG lover who also loves a good puzzle, Alundra is right up your alley! A young elf named Alundra finds himself aboard a ship on a course for the village of Inoa after having recurring nightmares. In his dreams, he is confronted by a being who calls Alundra “The Releaser”. He is told that since he is destined to come to this village to save the people from a curse.

Alundra soon finds out he has the ability to enter people’s dreams and that he is what is known as a “dreamwalker”. Here’s where the puzzles come into play. Upon entering a cursed person’s dream, Alundra must navigate their nightmares and fight enemies in order to restore the sufferer. Much like real-life dreams these places are convoluted, hazy and generally confusing until the player figures out how to use objects throughout the dream to manipulate the setting and get to the essence of the dreamer in order to save him or her.

Of course Alundra gets blamed for this curse since these strange things began happening when he arrived. Alundra is not to blame, however. Melzas, a demon is the being responsible for all these occurrences and who Alundra must face to save the villagers. 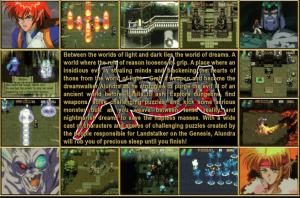 About the dungeons/dreams. I played this game when I was around 17 and I always enjoyed a good puzzle, but these are NOT easy! But that is what makes this game fun. It’s not your usual dungeon grind. I know some other RPG’s incorporated little “move the pot onto the tile to open the door” mechanics, but Alundra goes way beyond that. It’s a top-down view game, and battle is real-time. Real-time battles work well with this game, because with all the things you have to do in the dungeon setting, random encounters would take too much time away from actually solving the area.

I won’t give away spioilers to this game, but I will say that the storyline gets darker as the game progresses. You immediately start feeing terrible for these villagers (there’s a funeral within the first 25 minutes or so of the game if I recall). Alundra reminds me a lot of Crono as he is a silent protagonist, isn’t sure of his abilities but somehow soldiers on to this destiny he had no idea he was getting himself into, poor guy. Give this game a chance if you’re into more than just dungeon grinding and killing monsters (no worries, good ‘ol monster slaying is fun too!)