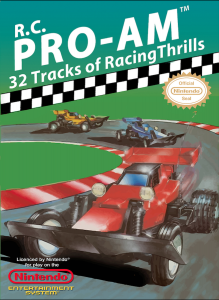 Released in 1987 by Rare R.C. Pro-Am is a really fun racing game played from an isometric viewpoint, this game has much to enjoy if you can get past the very harsh learning curve.

The gameplay is so much fun, playing like an even more intense version of Micro Machines (but 4 years earlier). There are 32 very challenging tracks, you must compete with 3 cpu controlled cars for first place. After you have completed a race you can use your winnings (if any) to soup up your vehicle with upgraded engines, better tyres etc.

The tracks themselves have several power ups scattered around them including various weapons and turbo’s (I believe Super Mario Kart may have influenced by this game also), this was the first time that I can remember having this feature in a racing game. 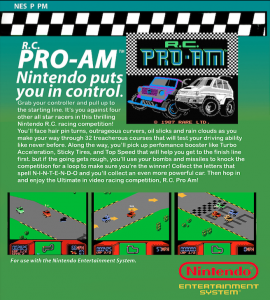 On the down side this game has no 2 player mode, which is a real shame as I can only imagine how much fun this game could be playing with a friend.

Despite this I would recommend this game to any fans of the racing genre, it might be the best racing game on the Nes and is a must buy.