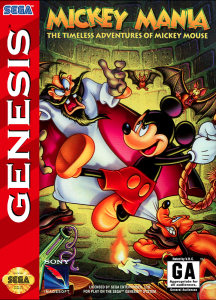 Mickey Mania was released for the Sega Megadrive in 1994 and whilst not as good as Castle of Illusion it is still a classic game.

This game has many good points, the graphics are superb (especially the Steamboat Willy level where the action starts in black and white and slowly turns into colour), the sound is superb with brilliant music and excellent speech from Mickey himself).

The controls are simple and very responsive but the best thing about this game is the amazing levels. Each level is based on a classic Mickey Mouse Movie from the past including “Steamboat Willy”, “The Mad Doctor” and “The Moose Hunter”. 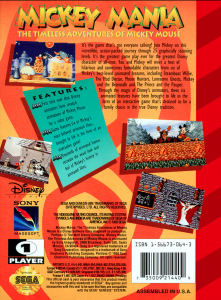 On the negative side this game is far too easy and can be completed in one afternoon, also the loading times for a cartridge game are awful. Sometimes between levels it can take around 30 seconds to load up, I have never known that to happen on any other Megadrive game.

That aside I would still recommend this game to any fans of genre, it is easy to find and usually costs under a fiver.