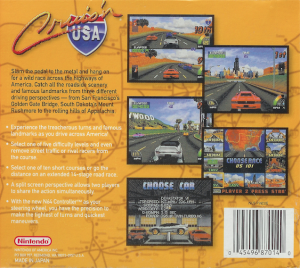 Cruis’n USA was released for the Nintendo 64 in 1997, a conversion of the arcade game that falls short compared to rival games on other consoles (namely Ridge Racer) but still has much to enjoy.
Firstly the graphics are nicely done with chunky cars and very detailed colourful backgrounds spanning several landmarks on the North American Continent, there are 10 tracks in total including San Francisco, Chicago and Washington DC.
The sound effects and music are both excellent (especially considering this is on cartridge and not a disc), the handling is great with Outrun style power sliding and oversteering.
Also great is the fact that you must not only race against your rivals but avoid oncoming traffic too, this certainly adds something to the gameplay which is common now but was not in the mid 1990’s.
On the downside if you try to play multiplayer you will find the game almost unplayable due to slowdown and terrible graphical pop up and glitching. Another problem is the collision detection, sometimes you clearly avoid an oncoming car and yet the game still registers a hit which is very annoying.
Despite this I would still recommend this game to fans of arcade racers, it is cheap and easy to find and is great fun in short bursts.