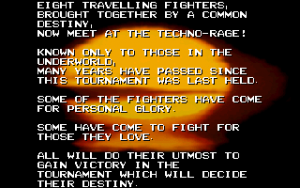 Released alongside the Playstation in Europe in the autumn of 1995 Battle Arena Toshinden madea massive impact upon all those early adopters largely due to the stunning graphics for the time.

The game features massive sprites and texture mapped backgrounds which were way ahead of the competitors of the day (namely Sega’s Virtua Fighter), the sound is also decent although a little raw at times. 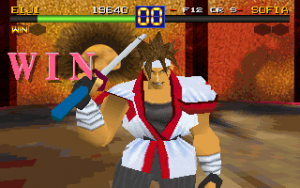 The gameplay is simple and fun, essentially a 3d beat em up similar to Virtua Fighter but here all the fighters have weapons. The addition of a dodge button makes for a more tactical battle and really helps to show off the games impressive 3d engine.

Negatives? Well there are no special moves and no unlockables at all which makes the game rather short lived (especially compared to the Street Fighter games). Despite this the game is great fun and I would recommend it to any fans of the genre.